VARIOUS: Baby I’ve Got It (Ace/Motown) 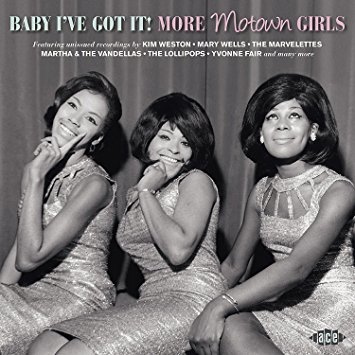 Every time an album like this comes out we reviewers are forced into using the same words, clichéd as they might be. Essentially we marvel at the depth of the Motown vault and ask the (same) question about why so much great soul has stayed unreleased for so very long.

What we have here is another wonderful collection of early Motown treasures curated with care and complied with love by UK reissue specialist Ace Records. The 24 tracker focuses on the distaff side of Berry Gordy’s roster and, back to those opening words, 16 of the cuts have never been available anywhere before while the other 8 had a “soft release” as downloads only in 2014. Motown buffs, of course, know that a non-release didn’t mean a lack of quality. Fact was that the Motown studios worked like a Detroit production line and so much stuff was recorded that it would have been impossible to release everything. Enter Gordy’s famed “Quality Control Committee”…. the final arbiters of what won release and for whatever reason everything here was rejected! We’ll never know why but, thanks to Ace, we can now enjoy a stunning collection of Motown gems – each one aurally defining that special early/mid 60s Motown sound that was so beguiling and attractive. If you weren’t around in the early 60s then it must be hard to understand just what that magic Motown sound meant. Fed on a bland diet of Brit pop (till the Fab 4 arrived), Motown music offered something quite different….. intoxicating, exotic even!

Enough blather; what has ‘Baby I’ve Got It’ got? Well, in short lots and lots… so much class and quality that it’s difficult to know where to start. Maybe the first track is a good idea…. Gladys Knight and the Pips’ ‘In My Heart I Know It’s Right’. This was the first recording the group made for Motown and crazily the Johnny Bristol/ Marvin Gaye/Harvey Fuqua song was left gathering dust till it came out as a download a few years back! Gladys’s other included track ‘Is This Why’ suffered the same fate… crazy!

Amongst the other “big” names on the album are Brenda Holloway, Martha and the Vandellas and Kim Weston whilst the “lesser” names number people like The Lollipops, Liz Lands, Little Lisa, Thelma Brown, Oma Page and the Lewis Sisters whose ‘Honey Don’t Leave Me’ is a classic ’66 Motown sound even though it was recorded on the West Coast.

Motown collectors might recognize two tunes – the Marvelettes’ ‘Playboy’ and Mary Wells’ ‘She Don’t Love You’ but the inclusions here are different takes to the ones released while the set also boasts some really interesting covers like the Marvelettes’ version of the Chiffons’ ‘Sweet Talking Guy’ and LaBrenda Ben’s look the Impressions’ anthem ‘It’s All Right’. Both stay close to the originals which bring us to the track here which really does define the mid 60s Motown magic…. Martha and the Vandellas’ ‘I’m Willing To Pay The Price’. Essentially, it’s a remake of their first big hit – ‘Come And Get These Memories’ but none the worse for that. The quality control team rejected it in favour of ‘Heatwave’. Interestingly, parts of the song (including the title) were recycled on Marvin Gaye’s ‘Little Darling Need You’. What a great housekeeper Berry Gordy was!