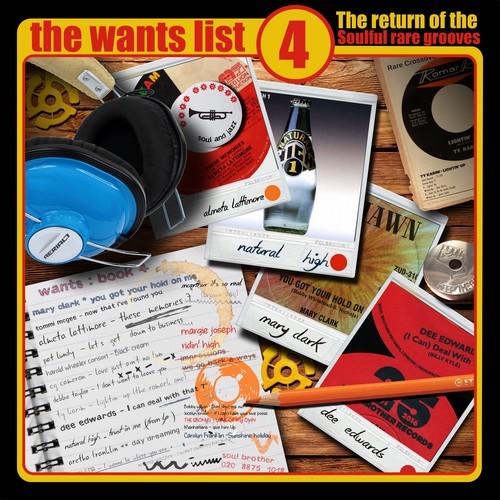 One of the UK’s leading soul, funk, and jazz reissue labels, Soul Brother resurrects its critically-acclaimed ‘Wants List’ series with a fourth volume a decade on from their last instalment. You’d require a lot of money to snap up some the rare items in their original format on this compilation but thankfully, but due to Soul Brother’s resourcefulness in exposing forgotten soul gems to the wider public, you get untold riches for the price of a double LP or CD. That sounds like an absolute bargain but the proof, they say, is in the pudding. Well, let me just assure you that unsurprisingly, given Soul Brother’s impeccable track record in the past, the “pudding” here is delectable and well worth shelling out on.

There are twenty-one tracks on offer and all of them are gems even if they are stylistically very varied.  There’s a cinematic, blaxploitation-era feel to the Harold Wheeler Consort’s instrumental opener, ‘Black Cream,’ taken from the keyboard-led outfit’s 1975 RCA LP of the same name. It’s a succulent starter but there are even more delicious morsel to come – like Motor City singer Almeta Latimore’s Mainstream 45 from ’75, the super-soulful mid-tempo groover, ‘These Memories,’ and husky-throated Mississippi-born/LA-based Ty Karim’s in-demand soulful swinger,  ‘Lighten Up Baby.’  More great but largely unsung recordings from female singers included here come from Jocelyn Brown’s gospel-infused soul ballad, ‘If I Can’t Have Your Love’ (recorded a few years before she became famous with ‘Somebody Else’s Guy’); Mary Clark’s ‘You Got Your Hold On Me’; Dee Edwards ‘Deal With It’; Pat Lundy’s chirpy 1978 side for Pyramid, ‘Let’s Get Down To Business’; Maxine Weldon, who offers a different, mellower, interpretation of  ‘I Want Sunday Back Again,’ a song recorded for Atlantic by Bettye Swann; and stentorian-voiced Debbie Taylor, whose string-laden 1975 Arista 45, ‘I Don’t Want To Leave You,’ is a forgotten treasure.

R&B groups are also well-represented. Zulema’s ‘Wanna Be Where You Are’ is a driving rare groove from ’74, while Natural High’s 1979 indie track,  ‘Trust In Me’, is much mellower. A post-Mayfield/Hutson Impressions offer cool harmonies on the 1974 track, ‘We Go Back Aways’ and another notable soul harmony group, The Manhattans, serve up ‘Give Him Up,’ a classy George Kerr-helmed side for the deluxe label from 1971. The Ebonys also impress with their soulful 1976 take on the Average White Band’s groove ballad, ‘A Love Of Your Own.’