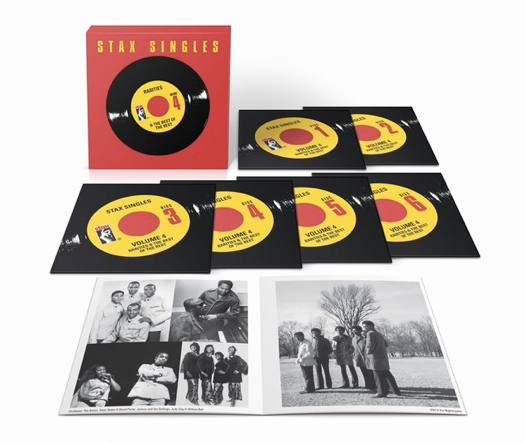 Issued to conclude Stax’s 60th anniversary celebrations, this fourth and final instalment focusing on the iconic Memphis label’s singles output collects together all the rarities and odds and sods from its catalogue. At 6 CDs and 145 tracks, it’s a huge, almost indigestible cache of material even for a Stax completist with the most prodigious appetite. Some of Stax’s big hitters are featured – think Isaac Hayes, Carla and Rufus Thomas, Booker T & The MG’s, Sam & Dave, Eddie Floyd, and William Bell, who are all represented by some of their more obscure cuts and B-sides – but it’s the label’s more esoteric and unsung acts that dominate the track listing.  These include forgotten vocal groups –  among them The Astors, Ollie & The Nightingales, Baracudas, The Canes, The Cobras, Jeanne & The Darlings, The Newcomers, Barbara & The Browns, Hot Sauce – male singers (Sid Selvidge, Casper Peters, Clark Sullivan, Chuck Boris, Ben Atkins) and female songbirds (Ilana, Karen Casey, Connie Eaton, Ruby Johnson, Shirley Walton).

Anyone who though that Stax was exclusively an R&B label will need to think again after delving into discs 4, 5 and 6. Disc 4 brings to light some of the label’s country music exponents. Black singer, O. B. McClinton (aka the ‘Chocolate Cowboy’)  was arguably the most famous of their country critters and is featured twice but there was also Sid Selvidge, a group called The Caboose,  and deep-voiced cowboy, Casper Peters. There were also pop singers like Clark Sullivan, old school crooners such as the resonant-voiced Billy Eckstine,  and even noted jazz drummer, Chico Hamilton, who recorded for the label in the ’70s (though with little success). Disc 5, which focuses on some of the label’s rock and pop  roster, including the excellent cult Memphis group, Big Star and psych-rock acts Finley Brown (whose hard rock-oriented ‘Gypsy’ is a standout) The Little Rich Kids, Lonnie Duvall,  The Knowbody Else, and the Doors-influenced Southwest F.O.B. It’s a mixed batch of material but certainly an intriguing one.

In acute contrast, disc 6 concentrates on Stax’s gospel output, featuring sanctified sides by the Rance Allen Group, The Dixie Nightingales, The Jubilee Hummingbirds, The Stars of Virginia and Roebuck ‘Pops’ Staples. But if it’s pure, unadulterated Memphis soul music you want, there’s plenty to hand here on the first three discs. The Staple Singers are represented alongside such redoubtable Stax luminaries as Johnnie Taylor, Frederick Knight, The Soul Children, Shirley Brown, Mable John, The Mad Lads, Judy Clay, and Lynda Lyndell. An 80-page booklet featuring liner notes from Stax authority, Rob Bowman, plus essays by Lee Hildebrand, Alec Palao, and co-producer, Bill Belmont, puts the music into its rightful historical, political and cultural context. It provides the proverbial icing on the cake to what is a fascinating retrospective that offers plenty of surprises, even, perhaps, for the most knowledgeable of Stax fans.