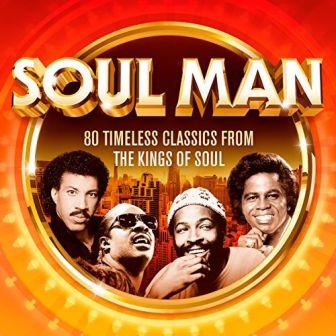 ‘Familiarity breeds contempt,’ goes the old adage, and as unlikely as it may seem, that expression holds true for some of soul music’s most iconic and enduring tunes – indeed, some of the genre’s best loved recordings have received so much exposure over the years via constant radio play and frequent appearances on TV adverts and movie soundtracks that some people (even bona fide soul fans) have grown indifferent to their charms. We live, of course, in an era where music is omnipresent, piping in the background at supermarkets, in shopping malls, and functioning like aural wallpaper. It’s no wonder that some of us have become jaded, even when it comes to listening to some of the greatest records ever made. We’ve just been bombarded and saturated by music to the point that we’ve become numb to its charms and even find it hard to respond emotionally to it.

With that in mind, when I perused the track listing to this 80-track/4-CD collection, I thought to myself, “here we go again, the same old stuff being trotted out.” As a long-time music writer and reviewer, I’ve encountered TV-promoted compilations like ‘Soul Man’ over the years to the point of ad nauseam. Usually, they’re cobbled together by marketing people rather than serious aficionados of the genre and sadly, ‘Soul Man’ is no different in this respect; the anomalous inclusion of jazz man Louis Armstrong’s ‘What A Wonderful World’ on CD 1 of this compilation is a glaring faux-pas that no knowledgeable soul fan would make. But while that unforgivable error confirmed my fears about this collection, in truth it’s a minor blemish that shouldn’t taint our appreciation of this compendium, which is not aimed at the soul aficionado but rather, the wider public. If you look at it as an entry-level guide to the masculine side of soul music, it does a pretty sound job – many of the significant, major figures are featured (James Brown, Otis Redding, Jackie Wilson, Marvin Gaye, Isaac Hayes et al) along with some less familiar names to the general public (Len Barry, Rare Earth, and Windjammer).There are tracks from different decades  too – the ’60s,’70s,and  ’80s are all represented – so you get a wide spectrum of music.

As a soul music primer it does a decent enough job and though I’ve heard many of the tunes myriad times before, I tried to listen with fresh ears and rediscover what drew me to soul music in the first place. It worked. Songs like Marvin Gaye’s ‘I Heard It Through The Grapevine,’ James Brown’s ‘I Got You (I Feel Good),’ Otis Redding’s (‘Sittin’ On) The Dock Of The Bay,’ and Percy Sledge’s ‘When A Man Loves A Woman’ and Curtis Mayfield’s ‘Move On Up’ – so familiar to me that I usually switched off when I heard them – were transformed and sounded fresh and new again, their soulful expression resonating in a deeper part of my being. As well as solo male performers, plenty of groups are represented, ranging from the doo-wop influenced Drifters, Chi-Lites and O’Jays to funky outfits like Parliament, The Bar-Kays, Ohio Players, Kool & The Gang, The Gap Band, and Cameo. Jazz-infused soul comes from the excellent Gil Scott-Heron (his fabulous ‘Lady Day & John Coltrane’), George Benson and The Blackbyrds. And there are plenty of ’80s cuts as well, including killer tracks from Luther Vandross, Rick James, Cameo, Lionel Richie and Will Downing. It’s all good stuff.

So, whether you’re an inveterate soul music fanatic or just a casual browser passing through,  there’s plenty to enjoy and appreciate here – and perhaps, like me, the collection will make you re-evaluate over-familiar old classics that you may have taken for granted.