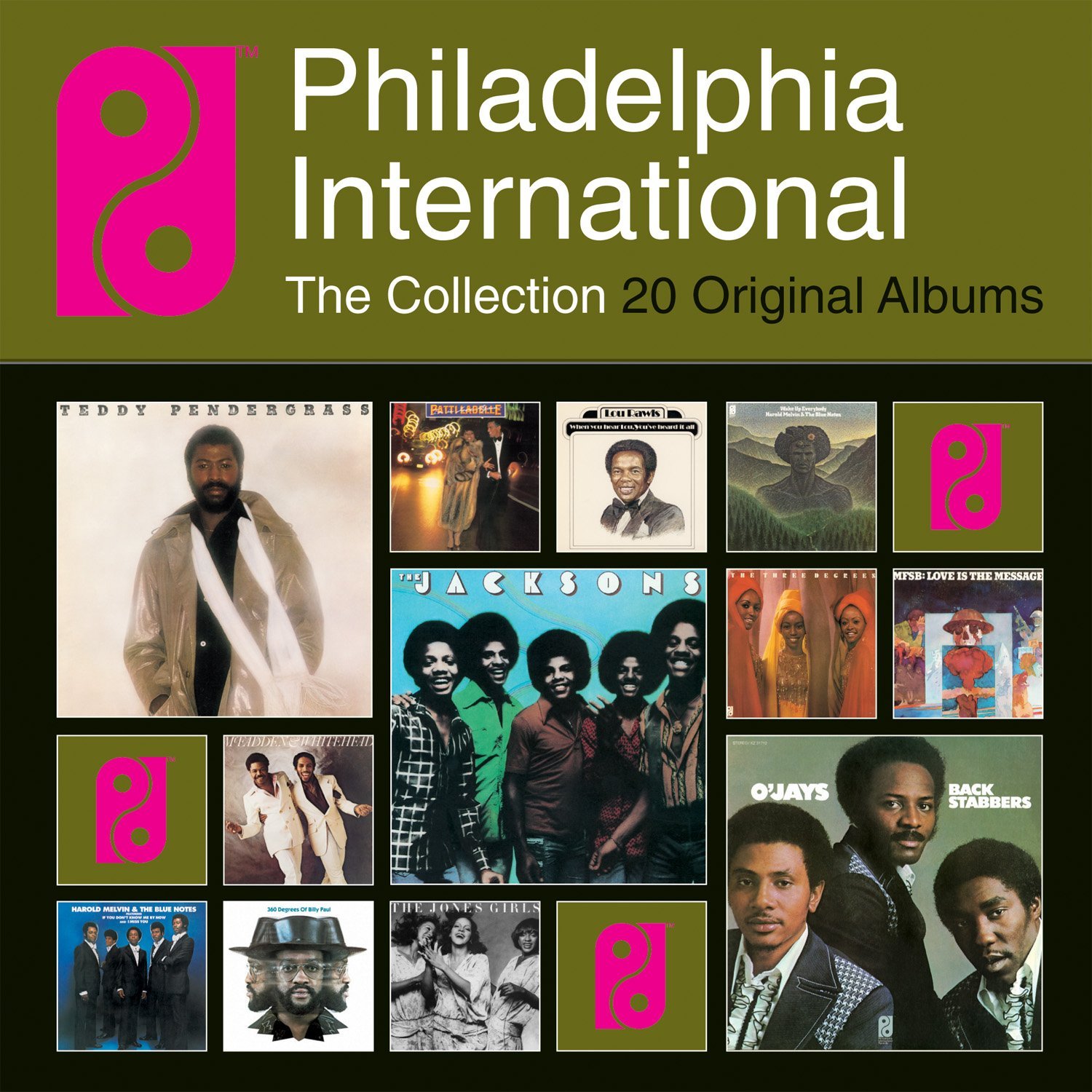 There was a significant power shift in soul music at the beginning of the ’70s. Based in Detroit, Berry Gordy’s Motown company was indubitably the dominant label in black music in the 1960s but at the start of the next decade, its position was usurped by an upscale east coast record label masterminded by producers/songwriters Kenny Gamble and Leon Huff. It was called, of course, Philadelphia International Records (P.I.R.) and the elegant, heavily orchestrated, house band sound that characterised Gamble & Huff’s oeuvre became synonymous with the ‘City of Brotherly Love.’ This new box set features twenty ‘classic’ albums in mini replica LP jackets that showcase the Philly sound at the height of its popularity. While seasoned soul fans will, in all probability, already own many of the set’s constituent titles, those new to or relatively unfamiliar with Gamble & Huff’s work will discover untold riches here.

The key early signings to P.I.R. at the start of the ’70s were the O’Jays, Harold Melvin & The Blue Notes, Billy Paul, and The Three Degrees and all four are represented here. The quartet had very different styles but were a perfect fit for the varied songs and slick production of Gamble & Huff. Stylistically The O’Jays, a versatile threesome led by Eddie Levert’s strident tenor, were given dance floor anthems with gospel choruses and ballads that were inflected with blues and jazz cadences. More significantly, the group were a vehicle for articulating Gamble & Huff’s social conscience, or what the producers themselves called the ‘messages in the music.’ The trio’s P.I.R. debut LP, ‘Backstabbers,’ is one of several five-star LPs in the box set – ranging from the plea for world harmony represented by the glorious, uplifting proto-disco groove of ‘Love Train’ to the haunting title track, an edgy ode to betrayal, it encapsulated P.I.R.’s widescreen symphonic soul aesthetic. The group’s 1973 album – also contained in this collection – ‘Ship Ahoy,’ was even more ambitious in scope, blending dark themes of slavery (the epic ‘Ship Ahoy’), distrust and insincerity (the gospel-hued ‘Don’t Call Me Brother’), and avarice (the funked-up soul sermon ‘For The Love Of Money’) with blissful declarations of universal unity (‘Now That We Found Love’).

Harold Melvin & The Blue Notes also played a key part in P.I.R.’s early success. They spotlighted drummer-turned-lead vocalist Teddy Pendergrass, who shined on the outfit’s 1972’s eponymous debut LP. Its killer cut is the evergreen and much-covered soul ballad, ‘If You Don’t Know Me By Now.’ The group’s 1975 album, ‘Wake Up Everybody,’ is also included in this set; its chief standout being the disco dancer, ‘Don’t Leave Me This Way.’ Inevitably, the husky-voiced Pendergrass went on to carve out a stellar solo career soon after. His self-titled P.I.R. solo debut combines sensual bedroom ballads – Pendergrass’s undoubted specialty – with sleek disco-funk. Present, too, is his ’77 album, ‘Life Is A Song Worth Singing,’ featuring the classic nocturnal smoocher, ‘Close The Door.’

By contrast, another distinctive male vocalist, Billy Paul – who was a seasoned veteran when he signed to P.I.R. – came from a jazz and blues background. He’s mostly remembered for his memorable rendition of Gamble & Huff’s immortal paean to adultery, ‘Me & Mrs. Jones,’ which was a global smash and also the keystone track from his breakthrough 1972 album, ‘360 Degrees Of Billy Paul.’

Another relative veteran with an immediately identifiable voice, Lou Rawls, joined P.I.R. when he was forty in 1975 and scored ten US R&B hits for the label, including the chart-topper ‘You’ll Never Find Another Love Like Mine,’ which is the choice cut on his 1976 album, ‘All Things In Time.’ Another Rawls album, ‘When You Hear Lou, You’ve Heard It All,’ featuring the lovely ‘Lady Love,’ is also present in a package that includes Philly tunesmith Bunny Sigler’s 1974 album, ‘Keep Smilin’,’ keyboard wizard Dexter Wansel’s cult classic, ‘Life On Mars,’ McFadden & Whitehead’s auspicious ’79 eponymous debut (featuring the anthemic ‘Ain’t No Stopping Us Now’); The Intruders’ ‘Save The Children’ (its big hit was ‘I’ll Always Tell My Mama’), and surprisingly, perhaps, Edwin Birdsong’s self-titled 1979 outing for P.I.R., an album whose quixotic mesh of funk, soul and rock  flavours doesn’t really embody the traditional Philly virtues. Still, it’s an interesting inclusion.

P.I.R. was also home to some distinguished female singers – among them the fabulous Jean Carn, whose eponymous 1976 album for the label should have found a wider audience. Another revered soul chanteuse is the histrionic-voiced Patti LaBelle, who didn’t join the label until the early ’80s when the company’s fortunes were on the wane. 1983’s ‘I’m In Love Again’ was the singer’s third and final album for P.I.R. and yielded the R&B chart topper, ‘If Only You Knew.’

When it came to girl groups, P.I.R. has some of the best. The sexy and glamorous Three Degrees made an indelible impact with their self-titled debut for the company. It included their international hits ‘When Will I See You Again,’ ‘Dirty Ol’ Man,’ and ‘Year Of Decision.’ And no Philly collection would be complete without the Jones Girls – though they hailed from Detroit, their sleek harmonies will always be associated with the Philadelphia sound. They had been singing for years before they finally issued their first LP, 1979’s ‘Jones Girls’ which included the brilliant ‘This Feeling’s Killing Me.’

Gamble & Huff’s Philly sound was not only commercially successful during the ’70s but also hugely influential. Many other R&B/soul acts attempted to cash in, including the Jackson brothers. As boy band the Jackson 5 they had achieved world fame with Motown but as they matured they parted company with Motown, their star apparently on the wane. Signed to CBS’s Epic imprint as The Jacksons, their fortunes were revived when they joined forces with Messrs Gamble & Huff in 1976. The resulting album, ‘The Jacksons’ – a welcome addition to this box set – produced some memorable sides, including the superb ‘Show You The Way To Go.’

The backbone to Gamble & Huff’s Philly sound was their M.F.S.B. house band. A diverse ethnic and cultural mix of local musicians from rhythm and blues, jazz, and classical music backgrounds, the aggregation was instrumental in bringing Gamble and Huff’s symphonic soul vision to life. It wasn’t a surprise that they made albums under their own name and this box set contains one of their best in 1973’s ‘Love Is the Message.’

Bolstered by a booklet with liner notes and song credits, this is an improvement on recent no-frills major label box sets though sound-wise, there’s no evidence of fresh remastering. That’s the only minor blemish on what is a first class package that chronicles a unique period in black music and pays tribute to the visionary genius of Kenneth Gamble and Leon Huff.