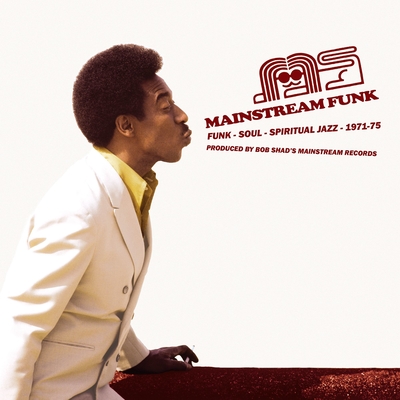 Founded in 1964 by a pioneering New York record producer called Bob Shad, whose main claim to fame was establishing the jazz-oriented EmArcy imprint at Chicago’s Mercury Records, Mainstream was home in the late-’60s to the psychedelic rock bands The Amboy Dukes (fronted by Ted Nugent) and Big Brother & Holding Company, which featured the future blues-rock superstar Janis Joplin. In 1970, though, Mainstream’s emphasis shifted to Shad’s first love, jazz, via their famed 300 Series range of LPs, which were issued between 1971 and 1975. Cherry-picked from several of those albums is this wonderful, gatefold-sleeved double vinyl album packed with a dozen funk-flavoured gems.

The legendary Sarah “Sassy” Vaughan, who recorded four albums for Mainstream, opens the proceedings with a sublimely jazzy interpretation of Marvin Gaye’s ‘Inner City Blues (Makes Me Wanna Holler),’ one of the highpoints from her 1971 LP ‘A Time In My Life.’ From there, the listener is taken on a wild sonic ride; from surreal cartoon funk (Prophecy’s ‘Betcha Can’t Guess My Sign,’ whose pitch-shifted “chipmunk” vocals pre-dates George Clinton’s Parliament) to movie theme treatments (trumpeter Blue Mitchell’s vibrant take on Gato Barbieri’s ‘Last Tango In Paris’), spacey jazz soundscapes (Buddy Terry’s ‘Quiet Afternoon’) and a quirky unclassifiable track called ‘M’Bassa’; the latter a vehicle for keyboardist LaMont Johnson to showcase the weirdly woozy timbres of the Yamaha EX42 synth-organ, then one of the most expensive musical instruments on the planet).

With informative liner notes provided by Record Collector’s Paul Bowler, ‘Mainstream Funk’ offers an enjoyable dip into producer Bob Shad’s back catalogue; but ironically, as music goes, it’s anything but safe or “mainstream.” Overall, it’s a great advert for one of the most important US jazz indie labels of the early 1970s.