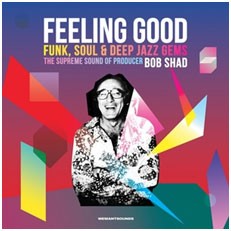 This superb 15-track compilation showcases recordings helmed by noted US jazz producer, Bob Shad, for his Mainstream label in the early 1970s. Born Abraham Shadrinksy in 1920, Shad reinvented himself by adopting a new name and began working in the music industry in the late 1940s. He eventually landed at Chicago’s Mercury label in the early ’50s, where his achievements included  birthing the company’s EmArcy imprint and producing recordings by Dinah Washington, Sarah Vaughan, the Clifford Brown/Max Roach quintet and Quincy Jones. He went independent and set up his own label, Mainstream, in 1964 though this compilation focuses on his company’s output from the following decade when he re-launched it as a jazz imprint. It features some big names from the world of jazz – singers Sarah Vaughan and Carmen McRae, horn blowers Blue Mitchell, Art Farmer and Clark Terry, and drummer Shelly Manne – all of whom were finding it difficult to get major label deals in the ’70s as jazz lost ground in terms of sales, exposure and popularity to rock and pop.

There’s a lot here that both seasoned crate-diggers looking for an antique groove as well as casual fans of funky lounge jazz will savour and appreciate. West Coast sticks man, Shelly Manne, serves up one of the set’s most impressive cuts – an atmospheric tone poem called ‘Mask.’ Those looking for something funkier will dig Afrique’s syncopated opener, ‘House Of The Rising Funk’ while cult singer, Alice Clark – of ‘You Hit Me (Right Where It Hurt Me)’ fame – serves up the bluesy, soulful ballad, ‘Never Did I Stop Loving You.’ Trumpeter Blue Mitchell’s ‘Soul Village’ rides on a mellow Fender Rhodes-driven groove garnished with cool horn riffs and Buddy Terry’s ‘Abscretions’ hits even harder, pushing the funkometer into the critical red zone. Another cut marked by an unusual neologism as a title is ‘Quadrivium,’ an undulating Africa-meets-Latin America style piece by obscure flautist/reed man, Hadley Caliman. Another largely forgotten figure, US jazz guitarist Jack Wilkins, tackles Freddie Hubbard’s classic ‘Red Clay’ and makes a good job of it. Another unfamiliar name – except to well-read collectors – is soul singer Ellerine Harding, who made a solitary LP for Mainstream before disappearing into the ether.

Elsewhere, though, more familiar names deliver the goods with characteristic aplomb. Both Sarah Vaughan and Carmen McRae are in imperious form. More frivolous is the jaunty ‘Rum & Mumbles’ where legendary trumpeter, Clark Terry, gets stuck into a deep Latin mode.  By contrast, fellow horn blower, Art Farmer, concocts a delicious, gently-simmering piece of orchestral funk called ‘Soulsides.’ It’s just one of many arresting performances that pay tribute to Bob Shad’s impeccable musical taste. The liner notes, by the way, are penned by Judd Apatow, the American comedian and writer, who turns out to be Shad’s grandson.