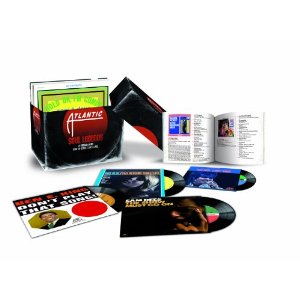 There’s no doubt that Atlantic Records played a hugely significant role in soul music’s history. Formed in New York in 1947 by a Turkish-born black music enthusiast called Ahmet Ertegun and a GI-turned-dentist, Herb Abramson, the company soon established itself as savvy and vibrant indie label whose specialty was rhythm and blues. Numerous significant chart successes by Ruth Brown and Ray Charles during the 1950s established Atlantic as an upwardly mobile and highly influential company. By the time the 1960s had arrived, the label was in pole position to usher in a new, sophisticated, breed of black urban music – soul. And its roster during that timeframe was mightily impressive, including such legendary soul music figures as Solomon Burke, Wilson Pickett, Otis Redding, Sam & Dave, Percy Sledge, and Aretha Franklin. Though the 1970s witnessed the company diversifying and finding success in the spheres of rock and pop, it continued to fly the flag for soul. To celebrate the label’s long association with soul music, Rhino has just released a 20-CD boxset called ‘Atlantic Soul Legends.’ The title might not sound inspiring – especially to soul collectors that are long in the tooth and have seen and heard it all before, especially in terms of reissues – but it’s a simple, effective and completely accurate description of the artists and musicians that made Atlantic such a potent force in soul music in the ’60s.

The set consists of 20 complete Atlantic albums spanning the years 1958-1975 selected by French producer/compiler, David Dutreuil, the man responsible for Rhino’s excellent Donny Hathaway boxset anthology from a couple of years back. It’s an interesting selection, comprising unimpeachable classics – such as Wilson Pickett’s ‘In The Midnight Hour,’ Otis Redding’s ‘Otis Blue,’ Sam & Dave’s ‘Hold On, I’m Comin’,’ Eddie Floyd’s ‘Knock On Wood,’ and Aretha Franklin’s ‘Lady Soul’ – along with three albums that are notable cult collectables. Two of them, Clarence Wheeler’s enjoyable sax-led jazzy funk fest, ‘Doin’ What We Wanna,’ and singer/songwriter Sam Dees’ ‘The Show Must Go On’ make their debut on CD, while the third cult album, Howard Tate’s eponymous LP from 1972, had been previously reissued by Koch but is now hard-to-find. The presence of those three albums will please serious collectors, particularly the Dees’ set, which is a bona fide deep soul masterpiece. Its material ranges from angst-ridden socio-political commentaries (check out the tense anti-drug message song, ‘Child Of The Streets’) to cathartic love ballads (the plaintive title track and ‘Just Out Of My Reach’ are magnificent examples of these). The album’s delay, by the way, in being reissued on CD was allegedly due to a long-running legal dispute over the album’s ownership between Dees and Atlantic.

So what of the other albums on the set? Donny Hathaway’s sterling 1970 debut, ‘Everything Is Everything’ – which includes his classic hit, ‘The Ghetto’ – reminds us what a prodigious talent he was. Less heralded as a soul talent was William Bell, whose 1967 LP ‘The Soul Of A Bell’ (released on the Memphis Stax label, which Atlantic distributed between 1961-1968) showcases the singer’s unique church-reared voice. It includes the self-penned classic ‘You Don’t Miss Your Water.’ Percy Sledge was another fine male vocalist on Atlantic’s books and his debut LP, ‘When A Man Loves A Woman,’ contains the haunting hit title song. Other artists featured are Ray Charles (‘What’d I Say’), Booker T & The MGs’ (‘Green Onions’), Ben E. King (‘Don’t Play That Song’), Solomon Burke (‘If You Need Me’), Rufus Thomas (‘Walking The Dog’), The Drifters (‘Under The Boardwalk’), Don Covay & The Goodtimers (‘Mercy!’), the Bar-Kays (‘Soul Finger’) and Arthur Conley (‘Sweet Soul Music’). Each album is presented in a mini-sleeve facsimile of its original LP cover while the music is sourced from what are described in the booklet as ‘the best existing masters.’ Despite this, the sound quality is consistently good. The booklet’s liner notes (rendered in both English and French) might disappoint some collectors as they are cursory rather than detailed but even so, this is a fine retrospective and one that will appeal to soul music novices as well as the hard-to-please cognoscenti. Retailing at around a very reasonable £35 this should be at the top of every soul fans’ shopping list.