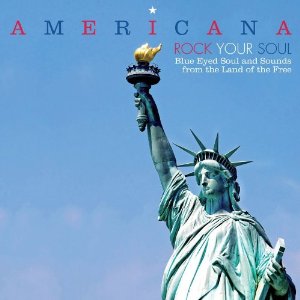 Everybody knows what “blue-eyed soul” is. Few people, though, have tried to define it accurately in words. That said the AMG Soul Encyclopaedia – in its “genres” section – devotes a couple of pages trying, but in the end does no better than naming the artists who they think best represent the genre’s sound. Their list includes the fairly obvious – the Righteous Brothers, Hall and Oates, The Rascals and Dusty Springfield. Interestingly they also cite David Bowie, and Culture Club! They don’t, though, mention any artist featured on this eclectic little compilation from the bbe people…which they claim will “shine a light on the dark corners of blue-eyed soul”.

‘Americana’ has been put together by Zafar Chwodry and Mark Taylor – acolytes of Gilles Petersen and sometime fans of adult orientated rock. Their liking of that genre led them onto blue eyed soul and they’ve scoured the States to come up with a mix which they hope will help the definition…. though again it’s an aural definition rather than a written one.

The album’s a 16 tracker and I have to say I haven’t heard of any of the featured artists… so no Righteous Brothers, Rascals… or even Culture Club. Rather we have people Eric Tagg, Jaye P Morgan, Evans Pyramid and the wonderfully named 1619 Bad Ass Band. All bar five hail from America’s West Coast (the five exceptions come from Hawaii) – so you can probably guess that the sound has plenty of space about it. Essentially, it’s soft rock – but with a sprinkling of black music idioms and (in places, at least) a modicum of attack and commitment from the vocalist. I’m thinking there of Barbado’s ‘I Love Music’ (not the O’Jays’ song, by the way). It begins like a country honky tonk ramble – but when the lead voice kicks in, the song is quite transformed. It’s not my favourite. That accolade goes to ‘Between Hello And Goodbye’ from Society of Seven. It’s a delicate Philly ballad pastiche – the kind that Lou Rawls could knock off with ease. ‘Thought You Ought To Know’ from Jesse McFall and the Funk Elegant Orchestra is another pretty, laid-back item. It’s not vital…in fact nothing on the album is; it’s all very pleasant and undemanding but whether it helps to further define the genre… I’m not sure.