VARIOUS: All Turned On (Ace/Motown) 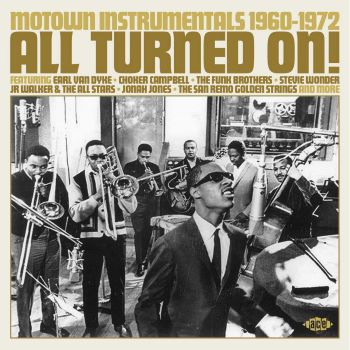 In the 50s and for the early part of the 60s, instrumentals were mainstays of the pop charts both here and in the States. Oddly, I think, for someone as commercially savvy as Berry Gordy, Motown didn’t seem to jump on that particular bandwagon. Hitsville did, of course, record and release plenty of instrumentals but they never pushed them with the same vigour as the famous vocal led singles and (here I stand to be  corrected by the statisticians) the only Motown instrumental to enjoy a decent chart placing was ‘Festival Time’ by the San Remo Golden Strings. That zipping, finger-clickin’ Northern classic climbed to a heady #39 on the UK pop chart in 1971, five years after it was recorded at Golden World (a label, of course, subsumed by Motown). The tune (the players were mainly member of the Detroit Symphony Orchestra) kicks off this new , intriguing compilation from Ace Records which cherry picks a generous 24 instrumentals from the Motown vault.

The album is named for  the track ‘All Turned On’. Credited to Bob Wilson and the San Remo Quartet, it became a Northern favourite and, featured here, Bob and his band are one of several names that will be familiar to soul collectors . So, you can be sure that there’s tunes here from Earl Van Dyke and Choker Campbell (their early Motown instrumental albums are now hugely collectable) alongside various line ups of the famed “Funk Brothers”. The track here that is actually credited to them is ‘True Fine Boy’ which lay in the vault till 2020 but you can be equally sure that on most of the tunes here plenty of the Brothers will be present. Stevie Wonder gets two inclusions – his 1963 ‘Let Me Loose’ and his 1968 cover of ‘Grazin’ In The Grass’ from his   thinly disguised Eivets Rednow album.  Odd  for  and Ace compilation to offer two tracks from the same artist but there’s two here to show how, over a short time “Little” Stevie’s sound and approach matured. Junior Walker gets two tracks too – ‘Sweet Soul’ and ‘Good Rockin’’. Both show what his fans know – the man could blow. Remember, though, he had to turn to vocals to score his hits!

Motown collectors will be delighted to know that the collection features plenty of rarities and oddities. Five of the tracks have never been previously released. They include ‘Great Google Moon’ from the Mysterions (they have a second inclusion, ‘Hot Sausage’ which was first released digitally in 2012) and a jazzy ‘Little Mack’s Shuffle’ from the wonderfully named Morrocco Muzik Makers. It was recorded back in 1963 and it’s likely that the drummer on the track is someone called Marvin Gaye. It seems that when the Dayton-based band turned up at Motown to record, the drummer went AWOL. MPG stepped in! Also “odd” in different kind of way is the last track, ‘Papa Hooper’s Barrelhouse Groove’ from the Crusaders. From 1972, this Mowest/Chisa recording is a little out of kilter with this compilation’s overall sound.

To include oddities like those, the compilers have left out some well-known, classic Motown instrumentals like ‘6X6’, ‘All For You’ and ‘Soul Stomp’. The assumption is that collectors will already have them! Instead they can enjoy the aforementioned Morrocco Muzik Makers, Nick and the Jaguars and plenty more that’s rare and unusual.