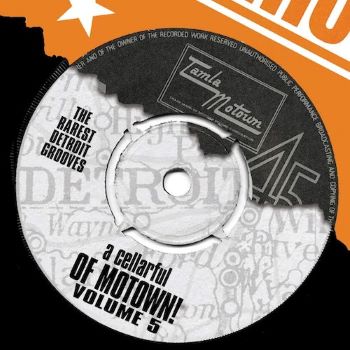 We’ve said it before and, I’m sure, we’ll say it again … that fabled Motown Record vault must be quite something! From here it makes the I-Cloud look rather puny!

In the last several years hundreds of long-lost, unknown treasures have been unearthed deep down in Berry Gordy’s cellar and different labels have dusted ‘em down and officially released them to the huge delight of soul and Motown collectors. Said collectors could be forgiven for thinking that by now, the vault must be all but empty… but no! Almost ten years since the last big tranche of unreleased Motown magic … the fourth volume of ‘A Cellarful Of Motown’, comes a fifth volume containing  a very generous 43 tracks of (mostly) previously unreleased Motown tunes (those that have been available before were part of a “digital only” project and we know that collectors like “the real thing” – for which, we believe, “there ain’t nothing like”… cue song!)

And speaking of Marvin’s duets (what a terrible link!) this collection features two tracks with our man in tandem with his second Motown duettist… Kim Weston. The two cuts are ‘That’ll Be The Day’ (one of those previous digital reissues) and the previously unknown ‘Just Too Much To Hope For’ – a song familiar to Motown collectors via versions by the Majestics and Tammi Terrell. The album features plenty of other big names… the Temptations, the Spinners, Edwin Starr, Martha and the Vandellas and Gladys Knight amongst them.  The real delight though comes from the material from the lesser known luminaries of the Gordy empire… people like Sammy Turner, Connie Haines, the Hearts of Stone, The Dalton Boys, Tommy Good and Ann Bogan. It’s also good to have some music attributed to the “Funk Brothers” – the snake pit session band. Here they offer two tracks…. ‘True Fine boy’ and ‘The Truth Does Hurt’. That latter is essentially the backing track to what was intended to be a Supremes single while the former has been around in rip-off price illegal versions for some time. Now you can enjoy a properly mastered and licenced version!

There’s no word whether ‘Cellarful 5’ will be the last of the collections of unreleased Motown treasures. I’m guessing it won’t be, like we said that incredible Gordy vault seems bottomless, so bring ‘em on! Fitting too, that this new retrospective of old but classic, genre-defining Motown is on the market in the same year that the mighty label is celebrating its 60th anniversary. And, yes, none of these 43 tunes were ever released (let alone hits!) in their time but they clearly show why Motown’s music was so magical and intoxicating back in those heady days and why the label is 60 not out!