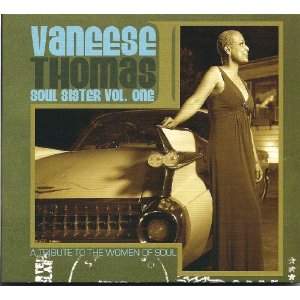 Vaneese Thomas is one of Rufus Thomas’ daughters and though not a household name, she’s enjoyed a long and successful career in music. An in-demand session singer (Aretha Franklin rarely worked without her), she’s also recorded a number of solo albums and though this set was originally released in 2009 she’s busy re-promoting it. The 12 tracker is a “covers” album – Vaneese’s tribute to the female singers who influenced her as she embarked on her own solo career.

She’s chosen some big names as role models – Aretha, Etta James, Gladys Knight, Tina Turner and Denise LaSalle amongst them and as for the songs… she’s gone for some “epics” – stuff like ‘Tell Mama’, ‘Since You’ve Been Gone (Sweet Sweet Baby)’, and ‘Nutbush City Limits’. Wisely, Vaneese doesn’t try to be too clever and change things around too much. She sticks closely to the original arrangements and tries to create freshness with her own distinctive vocal attack.

Pleasingly, she also works with material that’s sadly unknown beyond the world of the soul collectors, turning in great performances on Barbara Acklin’s ‘Love Makes A Woman’, Mitty Collier’s ‘I Had a Talk With My Man’ and Bettye Swann’s ‘Make Me Yours’. Freshened up, they’re heartfelt tributes. Vaneese is confident to include one of her own songs too – ‘It’s Killing Me’. Written with her guitarist, Nick Moroch, it’s a bluesy growler that speaks volumes of the lady’s Memphis roots and it’s certainly not out of place amongst the classic songs that surround it.

Vaneese is currently putting the finishing touches to an album of brand new material (see our recent news feature)… in the meantime this will certainly satisfy soul collectors who treasure “proper” soul songs delivered the “proper” way.