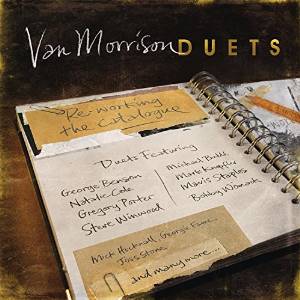 Subtitled ‘Re-working The Catalogue,’ Van Morrison’s latest project – mostly co-produced with Don Was – finds the mystical Irish savant/auteur exploring his own back pages in the company of a stellar line up of guests: ranging from the late Bobby Womack and volcanic-voiced Mavis Staples to jazz cats and kittens, Gregory Porter, Michael Bublé, Natalie Cole and the UK’s Clare Teal. Indeed, UK artists are well-represented on this heavyweight assemblage, which also features veteran singers/musicians Mick Hucknall, Georgie Fame, Chris Farlowe, Steve Winwood and Mark Knopfler as well as relative newbie, Joss Stone. With all this talent on board, you’d think that success was guaranteed but that’s not always the case with such star-studded affairs, which often flatter to deceive and can sometimes just be marketing exercises whose principal aim is widening the main artist’s demographic net (as with the Sinatra and Tony Bennett duets albums). Thankfully, ‘Duets’ ticks none of the above. It’s an enjoyable affair that finds some of the key songs in Van Morrison’s canon re-imagined as impassioned dialogues.

Bobby Womack joins forces with Van for an energetic revamp of ‘Some Peace Of Mind’ and another soul legend, Mavis Staples, brings new gravitas to the imploring ballad, ‘If I Ever Needed Someone.’ George Benson’s presence on vocals as well as his trademark guitar sound injects some smooth jazz tropes to the uptempo ‘Higher Than The World.’ Another distinguished jazzer, rising star Gregory Porter, brings a pleading gospel intensity to a reading of ‘The Eternal Kansas City’ which includes a finger-clicking, jazz-swing-style middle eight. Yorkshire’s queen of jazz, Clare Teal, shows another side to musical personality with her plangent interpretation of the slow ballad, ‘Carrying A Torch,’ where her interchanges with Morrison achieve a heart-wrenching poignancy. Canadian lounge maestro, Michael Bublé, is also out of his perceived comfort zone, contributing to the stomping, Motown-esque ‘Real Real Gone.’

Comprising 16 tracks, there’s a lot to digest here but because of plenty of musical light and shade as well as strong performances, the listener’s interest is easily maintained. As you’d expect, veteran Brits Georgie Fame, Chris Farlow, and Steve Winwood – all old pros – acquit themselves admirably. Joss Stone impresses opposite Van on ‘Wild Honey’ while veteran Texas singer, P.J. Proby, emerges from obscurity to show that he’s still got what it takes on ‘Whatever Happened to P.J. Proby.’ Two other notable cameos, from blues man Taj Mahal (on ‘How Can A Poor Boy?’) and Van’s daughter, Shana Morrison, add further spice to what is a well-seasoned and delectable confection.