TYRONE DAVIS: In The Mood (bbr) 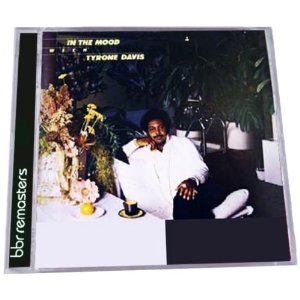 bbr Records (Big Break Records) open their 2013 account with the reissue of Tyrone Davis’ 1979 Columbia LP ‘In The Mood’. The album, which enjoyed a top ten R&B chart placing and spawned a couple of hit singles, sums up exactly what the Mississippi born soulster was all about in the 70s… smooth soul and even smoother dancers. In the 60s, though, things had been a little different. Hard to believe, but for a short time there was talk back then of Davis taking over the title of “King Of Soul” after the tragic passing of Otis Redding. Davis’s claim was based on the wonderful ‘Can I Change My Mind’ album – one of 7 long players he cut in Chicago for Dakar/Atlantic but as his career evolved, the rawness and passion that was there in the early days was ironed out and by the time that he’d hooked up with producer Leo Graham he was more than content to plough the smooth furrow… and you can understand why – he did it well and it was lucrative.

‘In The Mood’ was Tyrone’s fourth Columbia album and, helmed by Leo Graham, its recipe is much the same as the rest of his output for the major – an undemanding mix of ballads and sedate dancers. The title cut is a great Quiet Storm moment and it’s become a staple of “Lurve” compilations. ‘I Can’t Wait’ and ‘We Were In Love Then’ offer more of the same. The dancers like ‘You Know What To Do’ and ‘Keep On Dancing’ are polite rather than frantic while ‘I Don’t Think You Heard Me’ is a great little shuffle that could interest the modern soul crowd.

It’s all ultimately undemanding but what gives it appeal is Mr Davis’s lovely honeyed voice… a delight on almost anything and used to more soulful effect when he moved across to labels like Ichiban and Malaco. Davis, of course, passed in 2005, aged just 66. He’s been poorly served by the reissue specialists…. so we should welcome this release (which comes, by the way, with two bonus cuts – single mixes of ‘In The Mood’ and ‘Aint Nothing I Can Do’)