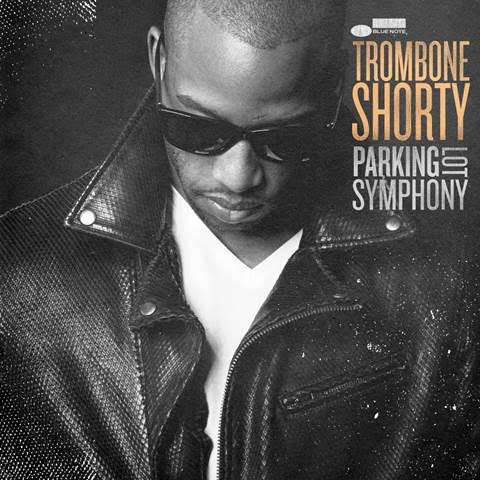 Trombone Shorty is the working name of New Orleans’ Troy Andrews. He tells us that his nickname comes from the time when, aged just 4, he played trombone in one of the many Big Easy marching bands. Must have been quite a sight, but since then our man’s never looked back. He began his recording career in 2002 but it’s really only in the last several years that he’s broken out. Maybe it’s down to the high profile New Orleans has enjoyed since the tragic floods, maybe it’s working liaisons with people like Mark Ronson, Cee Lo Green or Robert Randolph, maybe it’s the success of outfits like the Hot 8 Brass Band or maybe it’s simply because his sound is unique, catchy and totally infectious…but right now, he’s on a roll!

Whatever the reason, ‘Parking Lot Symphony’ – Shorty’s debut for the iconic Blue Note label – is sure to please all those who tuned in to the grooves of his last long player, 2013’s ‘Say That To Say This’. Like that album, this new set is a clever mix of originals and well-chosen covers. The two big covers are what, I guess, we could call New Orleans standards…. Allen Toussaint’s ‘Here Comes The Girls’ and the Meters’ ‘It Ain’t No Use’. A son of the city, Shorty takes no liberties. His versions are respectful…. but not po-faced respectful. They’re full of the optimism and the laissez faire attitudes that New Orleans specialises in.

The album’s other major homage to New Orleans is the melancholy ‘Laveau Dirge’. There are two versions here…. topping and tailing the long player and they’re a not just a proper throw back to the city’s famed funeral processions but also an opportunity for Shorty to show his virtuosity.

Elsewhere, the album’s title cut is another brassy slice of optimism … totally contemporary soul/funk while ‘Where It At?’, after an harmonic opening, mines a deep funk groove – one of many varied flavours on display here.