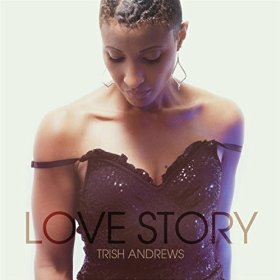 The UK and European soul crowd first got to know about indie soulstress Trish Andrews via her 2009 album ‘These Five Words’ (check our archive for reviews and interview). The album was a solid soul set and reinforced the fact that in these days of air-brushed, pro-tooled, glossy music productions real, sincere soul music was still being made. Now seven years later, Trish follows up with a new set – the 11 tracker, ‘Love Story’- named for the album’s standout track a big, old school ballad that features another great soul voice, Anthony Hamilton.

Amongst the other guests is Mike Philips whose sax beefs up a “Jazz Mix” of ‘Feed My Mind’. In its original incarnation (the album opener) the cut’s a crisp, mid-tempo beater that could find favour on the modern soul scene. The “Jazz Mix” is a fine piece of smooth jazz and both versions come recommended.

There are two more guests on ‘Love Story’. Whitney Andrews (Trish’s daughter), who features on ‘You Were A Girl’ – a mother/daughter coming of age dialogue; and rapper Adam Flitton who interjects on the sombre ballad, ‘Again’. Trish seems to have a penchant for balladry as she bares her soul again on ‘I Want More’, ‘I Don’t Know’ and ‘You And Me’.

The album’s big up tempo tune is the sweeping ‘Swagga’ which almost gets into soulful house territory, though I’m guessing the soul crowd will prefer the looser ‘You’ which has a real swagger all of its own.

Find out more about Trish Andrews and her ‘Love Story’ @ www.trishandrews.com