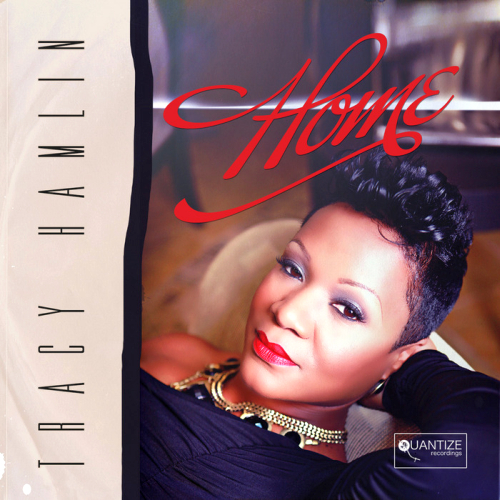 Baltimore’s Tracey Hamlin had her first big musical break singing with Pieces Of A Dream. As the work with the smooth jazz outfit became more sporadic, Tracey turned to background work – both in the studio and on the road. In that capacity she worked with people like Carlos Santana, Chaka Khan, Grace Jones, Marcus Miller, Kirk Whalum and Gloria Gaynor – with whom Ms H found almost permanent employment. At the same time she became vocalist of choice for a number of house producers and it’s Tracey’s voice upfront on Sublevel’s ‘Time & Time Again’ and Stacy Kidd’s ‘He Is The One’.

In 2005 she released her first bona fide solo album, ‘Seasons’. That was followed by 2009’s ‘Better Days’ – the album’s title track becoming a UK soul fave. A collaboration with DJ Spen led to 2011’s soulful house anthem ‘Drive Me Crazy’ and since then Tracey and Spen have been working on this, the lady’s third long player and the wait’s been worth it ‘cos ‘Home’ is a fabulous, proper modern soul set by anyone’s standards. Sure, the music and production veers towards the housier side of soul but our girl sings with a commitment and passion that would shame some real soul contenders. Try her cover of the Jimmy Webb song ‘This Is Your Life’. Best known to soul buffs in the Norman Connors/Eleanor Mills incarnation, Tracey takes it apart and makes it all her own. Better than other takes? I’d say so… no wonder a number of soul commentators and radio DJs are charting it on their “best of 2013” listings. ‘User Friendly’ and ‘Seasons’ provide more great ‘Home’ downtempo moments while if you’re still doubting Tracey’s soul quotient then go straight for her cover of Bill Withers’ ‘Use Me’.

Given the lady’s soulful house credentials there is, of course, plenty of heat for the feat amongst the long players’ generous 15 tracks. ‘Drive Me Crazy’ still has tremendous impact… two mixes of her anthem on the album by the way. You also get two versions of Luther’s ‘Never Too Much’. First mix comes courtesy of DJ Spen while the second tweak is John Morales’. No cover could ever rival the Vandross original but Tracey and her producers give a good account and both are destined to be floor fillers. ‘Free’, ‘Take Me To Paris’ and ‘Got To Be Strong’ are big dance anthems too. A tad different is ‘Bring Your Sweet Lovin’ Back’… a wonderful recreation of the 80s Weekender sound, while the album’s title track should keep the sophisticated modern soulsters happy with its crisp, retro feel. And in a nutshell that’s the secret of this album’s appeal. It offers something for every soul congregation; there’s nothing here not to like.