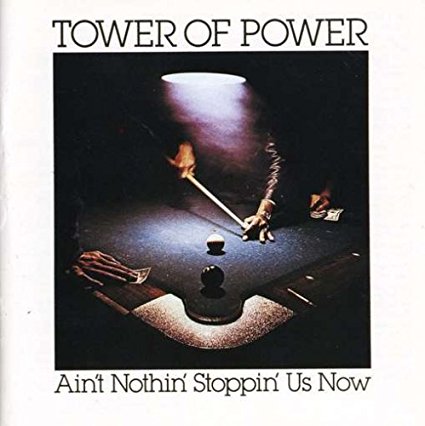 Oakland’s Tower of Power, with their famed horn section, are something of a soul music institution. Though they’re still going strong today, forty-seven years after their formation, this Vocalion reissue (which is a high-res Super Audio edition of the album remastered from a rare quadraphonic mix, though it’s compatible with standard CD players) takes us back to the band’s halcyon days in the ’70s.

Released in 1976, ‘Ain’t Nothin’ Stoppin’ Us Now’ was the group’s eighth LP overall and their debut for Columbia. It followed in the wake of an extremely fertile stint at Warner Bros, the commercial high point of which was the 1973 crossover hit, ‘So Very Hard To Go.’ But by ’76, the band had already chewed up and spat out four lead vocalists (Rufus Miller, Rick Stevens, Lenny Williams, and Hubert Tubbs) and now had Edward McGhee installed as lead singer (though he only stayed with the band for this album and was superseded by Michael Jeffries).

Though it doesn’t quite hit the creative heights of the aggregation’s best Warner Bros albums (namely ‘Back To Oakland’ and ‘Urban Renewal’) it’s a solid, decent long player that is characterised by soulful ballads and funkafied uptempo numbers that feature Tower of Power’s trademark punchy horn interjections and slick ensemble interplay. The most ear-catching cuts are the effervescent ‘You Ought To Be Havin’ Fun’ – a minor Stateside R&B hit – the chugging ‘Can’t Stand To See The Slaughter’ (which is reminiscent of the band’s classic Warner’s side, ‘What Is Hip’), and the mellow, mid-tempo, ‘It’s So Nice.’ Despite the bravado inherent in ‘Ain’t Nothin’ Stoppin’ Us Now’s’  title, ironically, the band’s move to Columbia witnessed the start of a commercial decline rather than a resurgence, though this album was the best of the three they released on the label.