TOUCH OF CLASS: Back To The Future (Libra Bros) 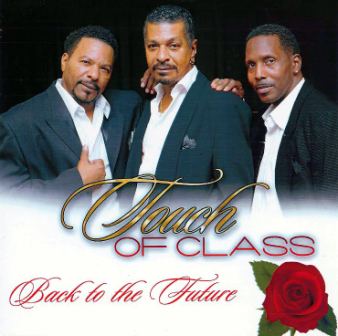 Touch of Class is a male vocal trio who work out of New Jersey and they have a great soul pedigree. They debuted back in 1976 when they were a quartet – brothers Pete and Gerald Jackson, Michael Hailstock and Herbert Brevard, and their first release was an album called ‘I’m In Heaven’. They also recorded a string of singles for labels like Atlantic, Next Plateau and Roadshow/RCA. En route the Jackson boys wrote ‘Turn The Beat Around’ for Vickie Sue Robinson (also covered by Gloria Estefan, of course). The group also worked closely with the Burke family and worked with the Stairsteps after Keni and Aloha Burke had left.

Now a trio, with Hampton Dickerson joining Pete and Gerald, Touch Of Class have just released their latest album on their own Libra Brothers Music label and ‘Back To The Future’ is a great little collection of old fashioned, quality, group soul of the kind that most people feared was no longer being made.

The 14 tracker is a clever mix of mainly mid-tempo grooves and sweet ballads. Best of those mid-tempo items is the set’s opener, ‘I Can’t Help’. It’s a real throw back to the golden days of group soul – great harmonies and a sweet falsetto lead. Best of the ballads is ‘Second Chances’ – a dreamy little thing with some fine guitar from the late Clarence Burke Jr. Indeed Clarence’s guitar is a feature throughout and ‘Back To The Future’ was one of the very last projects he worked on.

There are two cuts on the set that don’t quite fit the mid-tempo/ballad format of the album. First up there’s the set’s outstanding track – ‘Dance With Me’. This one’s a sophisticated dancer – nothing too energetic or awkward, just decent beats and a fine vocal that will recall the best of the Whispers (another group that Touch Of Class have worked with). The UK modern soul crowd could do worse than check this one out.

Then there’s the album’s closing cut – an energized reading of the Jacksons’ own ‘Turn The Beat Around’. More of a jam than anything else, it ends the album in fine style. ‘Back To The Future’ is proper, grown-up soul and you can find out more @ www.touchofclassmuisc.com