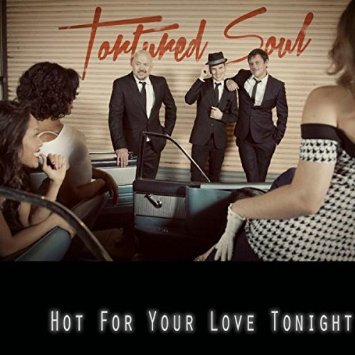 Tortured Soul are a respected US soulful house outfit who won acclaim some years ago with the classic ‘Always Heaven’ on the much loved Susu label. They were formed in the late 90s by keyboardist Ethan White, drummer Christian Urich and bassist Jason Kriveloff. Their aim (as their name implies) was to use a kind of soul as the basis of the dance music they loved. They wanted to make house music less mechanical, less electronic… more soulful, if you would. They clearly succeeded since through the early noughties they were a big draw in the New York dance clubs. Kriveloff was eventually replaced by Jordan Scanella and, sadly, in March this year Ethan White died aged just 39.

Urich and Scanella decided to continue working on the album the threesome had been planning and it’s just won European release on Dome Records. ‘Hot For Your Love Tonight’ is a 12 tracker and though it will be filed under ‘House Music’ the sounds the band deliver are right at the soulful end of that particular spectrum and many of the tracks would sit perfectly in any discerning modern soul DJ’s set. I’m thinking here of the loping opener ‘I’ll Be There For You’, the Chic-like ‘Don’t Lead Me On’ and the delicious ‘Can’t Keep Rhythm From A Dancer’. That last one is already winning huge support and no wonder… it’s ultra catchy and not many miles from the retro soul sounds that outfits like Cool Million specialise in. Elsewhere stuff like ‘I Don’t Need Your Love Tonight’ and the similarly paced title cut will appeal to the Robin Thicke/Pharrell/ Daft Punk brigade.

It’s all classy, polished, well-produced stuff and ultimately labels don’t mean that much… you either like the sound or you don’t. And if you’re into modern soul there’s an awful lot to like here.