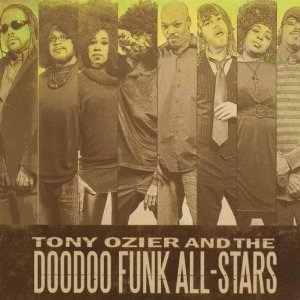 Texan Tony Ozier grew up listening to the likes of Stevie Wonder and Curtis Mayfield but on a teenage visit to Michigan he saw a concert by Parliament, Funkadelic, The Ohio Players, and Cameo and he was instantly converted to “The Funk”. Aged 18, he moved to Michigan where his skill on the keyboard took him into the area’s underground music scene. Then, after studying engineering in California he stayed in the Los Angeles area where he released two well received albums – ‘Mental Candy’ and ‘Aural Penetration’. For this – his third long player – Ozier has adopted a technique which has been used many times by his funk heroes – he’s adopted a sort of alter ego and put together an almost circus style band who he’s taken to an imaginary land where funk rules the roost. The alter ego is Captain Dookie Green; the band is the Doodoo Funk All-Stars; and the crazy land is Dookie On.

To help him on his inter-galactic funk quest, Tony has enlisted king Funkateeer, Bootsy Collins. Collins guests on the cut ‘Keep The Funk Alive’ and you don’t really need me to tell you what it sounds like. Right – it’s seriously off the wall – with sparse beats and a typical semi-spoken, laconic, tongue-in-cheek “vocal”. It’s a great throwback to the classic days of funkateering! There’s more of the same (minus Bootsy) on ‘Dookay’, ‘My Story’, ‘Swagger’ and ‘Jus Live Life’. Best of the up-tempo crunchers though is the femme-led (either Etta Ward or Nasifira Scroggins… the sleeve doesn’t say) ‘Chronicles Of Dookie Green’…. Really infectious. Sparser still, is ‘1 Of Them Days’ which features the great Yolanda Johnson on lead.

Best cuts to my ageing ears though are the ballads – ‘I’m Yours’ and ‘Never Gonna Let You Go’. The former is classic old school, soul with a sax line weaving in and out of the female vocal parts (Ward or Scroggins?) while the latter is a wonderful duet between Ozier and Scroggins (made the effort to find out this time – ‘cos she’s so damn good!). It proves that Tony Ozier can not only keep the funk alive, he also does a great job preserving the old school soul testifying soul tradition.

If you want to finds out more about Captain Dookie and the weird and wonderful land of Dookie On, then go to www.doodoofunk.com