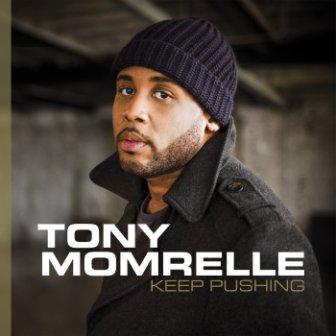 Tony Momrelle is one of the UK’s finest soul singers. With his roots in gospel, his big, warm and passionate voice has seen him working with all kinds of artists (people as varied as Elton John, Terry Callier, Gloria Estefan, Celine Dion, Janet Jackson, Sade, Gary Barlow, Andrea Bocelli, Gwen Stefani, Gabrielle, and Robert Palmer.) Tony’s also a big pal of Bluey Maunick and he’s been an Incognito mainstay for over ten years. Tony also enjoys a successful solo career and his 2013 EP, ‘Fly’ (with its lovely ‘Spotlight’) was one of that year’s top releases.

After the success of ‘Fly’ Tony took two years (in between other commitments) to put together a full album and ‘Keep Pushing’ was eventually released to critical acclaim… indeed some US media voted the set “Soul Album of The Year”. However for all kinds of complicated reasons the set seemed to have escaped the full attention of the UK music media and by extension the wider soul fraternity, consequently, ‘Keep Pushing’ is being repromoted and if you missed it first time around, don’t make the same mistake now. Cutting to the chase, ‘Keep Pushing’ is one of the finest UK soul albums of any era. Its chock full of great, “proper” songs and Tony delivers with a full conviction, passion and pride (shades of Stevie and Donny). It’s easy to hear those gospel roots and equally evident that our man’s profited from his time working with some of the biggest names in the business.

The album opens in fine style with the big, edgy title track – a real, convincing piece of modern soul; and by “modern” we mean properly contemporary… not “retro” as some soul folk seem to define “modern”. The track features an organic rap from Talib Kweli which adds to the song’s inherent tension. On any other album , this would be the standout, but on a set with so much quality as this it would be churlish to cherry pick.

Other immediate ear worms include Tony’s take on Donny Hathaway’s ‘Back Together Again’ with Chantae Cann taking Roberta Flack’s part; then there’s ‘Different Street’ – with guest input from Guitarist Tony Remy … no wonder this one’s already found its way onto several soul compilations; I keep going back to the gentle ‘A Million Ways’. This boasts the most delightful hook and in the absence of any new music from a certain Stevie Wonder, I just keep this one on repeat! And if you want a tear jerker try the closing ‘Remember’… I promise you’ll be reaching for the Kleenex. It’s a properly soulful ending to a consummate soul long player!