TONY MOMRELLE; Best Is Yet To Come (Vibe 45) 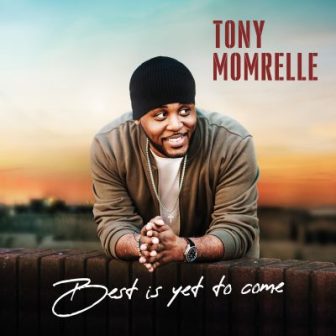 Mainstay of the Brit soul scene, Tony Momrelle must, by now, be fed up with two comments bandied about whenever his work is being played out or discussed by savvy soul folk. First how can someone sound so uncannily like a certain Stevie Wonder? And secondly, when oh when is he going to break into the major leagues? Well, I guess Tony’s flattered by the Stevie comparison (Mr Wonder knows of Tony and loves his work, we’re told) and maybe, fingers, crossed, this new long player will be the one to allow Tony to cross over. Mind you with a title like ‘Best Is Yet To Come’ it seems that Mr M has more up his sleeve. Well it’ll have to be something very special to beat this ‘cos it’s a corker! Many of this set’s 12 cuts are allready being rotated on soul radio (and the BBC!) while lots of experienced soul commentators are already touting the album as a potential “album of the year”!

‘Best Is Yet To Come’ was heralded last month by the single ‘Rising Up’ – a funky old beater, stuffed with brass breaks riding over complex rhythms and if that’s your thing there’s plenty more, like the sparse ‘Two Minutes Forty’ – a percussive jam that lasts – well, 2 minutes, 40 seconds. Then there’s the album’s live closer… ‘Believe To My Soul’ – funky and bluesy, it was recorded “live in London” – my copy doesn’t say where exactly. Pick of the up-tempo items is ‘My Paradise’. This is a lithe, Latin-flavoured work out that should remind you a lot of Incognito – Tony has worked with the band on many occasions.

And speaking of Incognito, another of the LP’s highlights, ‘We Have Searched For Heaven’, features another Incognito alumnus, Maysa, and the blend of the voices is quite magical. More magic comes via the balladic ‘We Can Have It All’ and the reflective ‘I Wanna Be Loved’. The lyric owes a little to ‘If I Were a Carpenter’ – but it goes deeper than that old Tom Hardin classic. And the album’s title track? Well, that’s another lovely ballad that will draw comparison with Stevie Wonder… even Donny Hathaway. If there’s better to come from Tony Momrelle, bring it on!