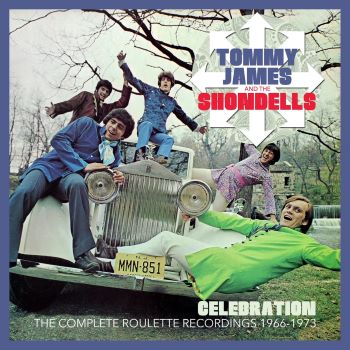 In 1968 the UK pop chart was topped by a raucous slab of bubble-gum pop, ‘Mony Mony’. It was infectious and even today savvy DJs can kickstart cheesy discos with the song. The artists were a US band, Tommy James and the Shondells and the only other time they troubled the British chart compliers was two years earlier when the similar sounding ‘Hanky Panky’ scraped the bottom reaches of the Top 40. And it’s with ‘Hanky Panky’ that this splendid 6 CD, 140 track retrospective of the band kicks off.

James, born Thomas Gregory Jackson in Dayton, Ohio in 1947 endured an itinerant childhood. By his early teens and smitten with pop, his family pitched up in Niles, Michigan where young Tommy formed his first band, the Echoes. They soon became the Tornadoes and then the Shondells, because Tommy once said, “it just sounded good!”. In 1964 they recorded an old Brill Buildings song, ‘Hanky Panky’ for local label, Snap Records. It meant little and the band imploded. In 1965 a Pittsburgh DJ started playing ‘Hanky Panky’ and it quickly took off with the DJ Bob Mack bootlegging copies. James obviously wanted a piece of the action and in Pittsburgh he soon got himself a new set of Shondells (a veteran five piece previously known as the Raconteurs). The breaking success of ‘Hanky Panky’ brought the music biz sharks circling and in the earlier 60s there was no bigger shark than Morris Levy who owned the notorious Roulette label. (If you have time and the opportunity, it’s fascinating to check out Levy’s life and the rise and fall of Roulette).

James and the Shondells signed to Roulette and stayed with the company till the mid-70s. With Levy’s muscle, the band scored 14 US hits. Hit records demanded albums and during his tenure at Roulette James and the band released a slew of albums. In 1970 Tommy and the group went their separate ways (after the singer collapsed and almost died on stage!).  James subsequently released three solo sets on Roulette. All those Roulette recordings (group and solo) are collected here – all the album tracks, all the singles and plenty of bonus cuts.

They are (rightly) presented chronologically and listening (one long session, not recommended… there’s a lot here!) you can hear the evolution of the band and that evolution is in its own way a microcosm of the evolution of beat music in the 60s. James and the Shondells began as a covers band (indeed their first hit, ‘Hanky Panky’ was a cover) and their first albums are stuffed with energetic covers  with plenty of soul material on offer.  Indeed, you can enjoy decent versions of two Impressions’ songs – ‘I’m So Proud’ and ‘It’s All Right’. Then as the band became successful, more original material became the order of the day and as the 60s faded the music became more whimsical and self-indulgent as evidenced by the titles of some of James’ solo efforts … the sound of stuff like ‘Lady Jane’ and ‘Silk Satin Carriage Waiting’ sort of explain themselves from the titling.

Because of its comprehensive nature all James’, big tunes are here – of most interest are those cuts that found favour with blue-eyed soul collectors – lovely confections like ‘(Baby Baby) I Can’t take It No More’, ‘Crimson and Clover’ and the ever-lovely ‘Crystal Blue Persuasion’.

Now aged 73, Tommy James is still working. He still performs with an incarnation of the Shondells and presents syndicated radio shows. Wonder if he spins any of his old stuff?