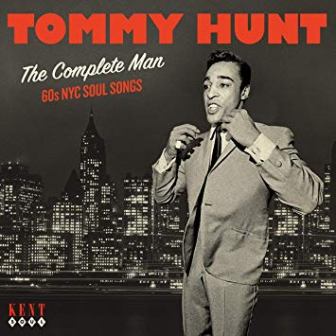 Tommy Hunt (born Charles Wilson in Pittsburgh in 1933) is a proper soul veteran. Sadly, despite almost 60 years in the business and with a fine back catalogue across a raft of labels, Tommy has never quite made soul’s Premier League. That said, as is often the way, he’s revered by soul connoisseurs and collectors and both groups have been admirably served by UK reissue specialists Ace/Kent.

Back in 1997 Kent issued the Hunt collection, ‘The Biggest Man’ – ostensibly a “best of” set that included classics like his original version of ‘I Just Don’t Know What To Do With Myself’. The 29 songs were taken from his time with the Scepter and Dynamo labels and a while back the Ace archivists discovered plenty more Hunt material in the vault – so, here we have a second Tommy Hunt retrospective that collects together the rest of his 60s output for those two labels alongside rarities he cut for Atlantic and Capitol.

The 25 tracker is sub-titled “60s NYC songs” but, oddly, some of the material was actually recorded in Chicago… notably, a brace of Van McCoy songs cut for Atlantic – ‘I Don’t Want To Lose You’ and ‘Hold On’. Both are classy Carl Davis “uptown” productions but sadly they failed to sell and Atlantic terminated their contract with Tommy. From there he moved to Capitol where a superb single that paired Jimmy Radcliffe’s ‘I’ll Make You Happy’ with a gritty ‘The Clown’ also failed. All included here.

Most of the cuts, though, come from the singer’s time with Scepter and Dynamo and there’s plenty of previously unissued stuff to keep collectors happy. Amongst the “new” stuff is a version of the Shirelles’ ‘What’s The Matter Baby’ and a Sam Cooke flavoured ‘One Of These Days’. Also of note is the included take on Tommy’s biggest hit ‘Human’. Up till now, it’s the 7″ single version that’s done the rounds; here Kent offer the original LP mix.

As ever with Ace/Kent, the sleeve notes will tell you everything you need to know about a fine soul stylist.