TOM GLIDE AND THE LUV ALL STARS; In The Name Of Luv (Expansion) 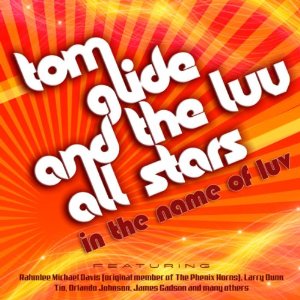 This ultra smart little collection has been garnering lots of accolades in recent weeks on the modern soul sites and forums; equally, key tracks are being played to death in discerning modern soul rooms everywhere… and it’s easy to hear why. Tom Glide’s ‘In The Name Of Love’ is an almost perfect synthesis of what modern soul is all about. Modern – yes, but with a real retro feel and a clear, clean, crisp sound that’s aimed at setting feet tapping and heads nodding. In lots of ways it’s very similar to the Cool Million albums and that great set from Wadz – so it may comes as no surprise to you to learn that the genesis of this set is European too – French to be exact.

First some context… in the mid 80s Monsieur Tom Glide shook off his Paris-based love of people like Jimi Hendrix and the Beatles and embraced the sounds of Earth, Wind and Fire, Kool and the Gang and Stevie Wonder. As a student, he formed a band and with his musical blood brother Patrick Smadja promised that one day they’d record an album that would capture all the joy of prime time EWF. In the early 2000s the duo made a number of recording forays but in 2009 they began in earnest to work on their soul dream. Then in the autumn of 2009 they relocated to Los Angeles to enlist some real musical muscle and without too much difficulty they signed up players of the calibre of Rahmlee Michael Davis (trumpet), Larry Dunn (keys), Alex Al (bass), James Gadson (drums) and Rafael Padilla (percussion). Factor in a duo of top vocalists – Tio (allready known to soul fans here as Tim Owens) and Orlando Johnson – and you have the ingredients for some great soul.

And yes, there is some great soul music on the set but I have some nagging doubts about the faster, dance-floor material. There the clear reference point is EWF. Tracks like ‘Get It Off’, ‘What’s Your Fantasy’ and ‘Can U Feel It’ are stuffed with punchy brass stabs, Phil Bailey style vocals, catchy chord changes and almost irresistible beats. However they reek of pastiche rather than originality and beg the question about where does creativity end and karaoke begin? Ditto the Kool and the Gang tribute, ‘Kool Party’. Don’t get me wrong all these tunes are fine and exactly what the denizens of the modern soul rooms crave, so well done to M. Glide for keeping them happy… but they didn’t quite convince me. What saves it all are two fabulous ballads – ‘I’m Crazy’ and the album’s title cut. Both feature Orlando Johnson and the former is a real sweetie while the latter – complete with spoken intro and mid way musings – is an epic 7 minute plus builder with classy harmonies and delightfully understated brass… proper modern soul music to end an album that will please many.