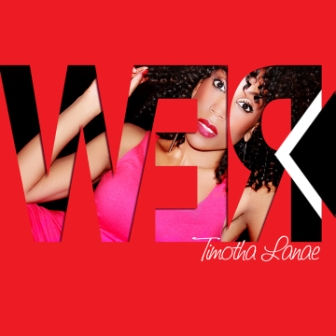 US singer and actress Timotha Lanae’s debut album ‘Red’ won huge critical acclaim and for a time nestled at #1 on the UK soul chart. Her track on the wonderful ‘Soul Love 2014’ compilation won her more fans – all beguiled by her unique and beguiling voice. Her’s is not the voice of the stereotypical church-reared diva; rather, Timotha’s timbre is reminiscent of Erykah Badu’s while her overall soundscape has a peculiar ethereal quality – not quite in the same league as the legendary Rotary Connection, but certainly going that way. Timotha describes her style as “A touch of Jazz, R&B, Soul and Hip Hop too, I mix these all together to make my grooves”. Whatever, her sound is unique and displayed at it best on this brand new album, ‘Rewind’.

The set was originally slated for 2015 release but interest in it (generated by the lead track, ‘Who’s That Girl’) has led to an earlier “soft” release – with the big promotion push coming in the New Year. ‘Who’s That Girl’ still sounds good and it’s a perfect embodiment of where Timotha’s at. Lazy and sprawling, it’s a classic loose-limbed neo-soul ramble. There’s more of the same on ‘God’, the remix of ‘My Man’ and ‘Be You’ which boasts a sweet melodic hook mid way through.

If you like ballads, the interlude that is ‘Just One Minute’ will fit the bill (but it is just that – a brief minute) though the sensual title track offers more satisfaction.

The album also features two great dancers that will appeal to those of the modern soul crowd who can conquer their antipathy to the vagueness of neo/nu soul. Tunes in question are the ultra tight ‘Good’ and the finger-clicking ‘God Love Music’. The former in particular is as good as any of this year’s plaudited modern soul grooves… and if my ears serve me right producer Ben Obi has taken his inspiration from the classic remix of Teddy P’s ‘Believe In Love’.

To help promote the album, Timotha will be doing an in-store signing @ Putney’s Soul Brother shop on Saturday December 20th from 12.30.