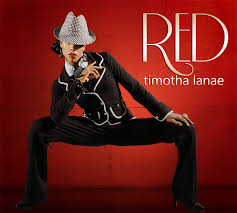 Timotha Lanae hails from Minneapolis and apart from singing she’s a well-known dancer and actor in the city that gave us Prince. Indeed his Roylaness is a good starting point from which to discuss Timotha’s debut album. ‘Red’, you see, is as enigmatic and off the wall as anything that Prince ever produced. Timotha grew up listening to her father, Timothy’s music. He was a big fan of funk, Motown, gospel and jazz and you can hear hints of al that in this 12 tracker – but to those colours Timotha has added the eccentricity of Minneapolis and lashings of neo/nu soul.

Indeed as the album starts – with ‘Smooth Music’, a short introduction – the indication is that we’re heading full square into a typical neo-soul set. The short cut is vague and spacey and the vocal is lightweight. Crueller reviewers might say that what we don’t need right now is another new age femme soulstress. Any misgivings are dispelled with the second track – the much meatier, tighter ‘My Man’ which is followed by the retro sounding ‘Radio Remix’ which is given more colour by the input of Mint Condition’s Stokley Williams. Elsewhere ‘Gettin’ To Know You’ is a pleasing summer vibe, while the title cut has a smooth jazz feel. Some great sax on this one (courtesy of Brian Gallagher)… the motif winding itself around Timotha’s vocal. It all makes for a great, sensual quiet storm moment.

There’s more serious jazz on a brave cover of Dizzy Gillespie’s tricky ‘Night In Tunisia’ and the album’s completed with a pair of so-so ballads (‘Talkin’ to Myself’ and ‘Gettin’ To Know You’ ), a couple of fluid jazzy rambles (‘Jazzy Lady’ and ‘Red & Blue’) and more neo-soul in the shape of ‘Intoxicated’.

For anyone interested in the performance aspect of Ms. Lanae’s work, she’s made dramatic videos of each song – all now readily accessible via You Tube, while the lady’s currently working on an original musical to be called ‘REDington’ … a follow up to this album.