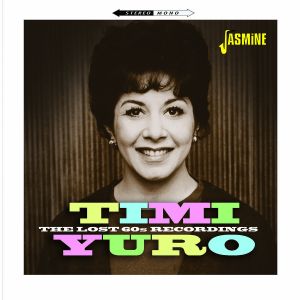 Timi Yuro was a so-called “blue-eyed soul singer” long before the phrase was ever used. Born in Chicago in 1940, Rosemary Timothy Yuro began her singing career entertaining diners in her parents’ Italian restaurant, before moving onto the LA cabaret circuit. In 1959 she was signed to Liberty records and enjoyed her first hit in 1961 with a revival of Roy Hamilton’s ‘Hurt’. More hits followed – most produced by Clyde Otis and, famously, we’re told, she rejected the offer from Burt Bacharach to be the first to record his ‘What The World Needs Now is Love’. Burt obviously heard something in Timi’s powerful, emotional, soulful delivery; for her part, Timi clearly didn’t hear anything in the song! After a dalliance with country music Timi signed with Mercury where she cut one LP under the guidance of Quincy Jones. Then she was back to Liberty but more success proved elusive and as her career lost momentum, she quit the business to concentrate on her marriage. There were “comebacks” of sorts but after contracting throat cancer, Ms Yuro sadly died on in 2004. She was 63.

Timi Yuro left a concise but excellent music legacy and it seems that Burt Bacharach and Quincy Jones weren’t her only fans. She has a large fan following that is almost cultish. I remember, for instance that the late Dale Winton always claimed Timi’s ‘It’ll Never Be Over For Me’ was his favourite record of all time…. and whenever he had the opportunity it always featured in his radio shows.

Well Ms Yuro’s legions of fans will be delighted with this new release from Jasmine Records. The set brings together a generous 20 “lost” Timi Yuro recordings. The album offers previously unissued cuts from Timi’s Mercury and Liberty years along with a few Mercury singles that have never been on CD before.

Interestingly the album opens with two tracks from Timi’s first ever recording session back in 1960. They are the old Italian favourite ‘That’s Amore’ and a nod to rock and roll, ‘I Still Love You’ – a duet with an unknown singer. They’ll please the TY completists but the soul folk will look for something deeper…. and they’ll find plenty to savour. Here’s just a few – the lazy ‘Satan Never Sleeps’ shows the power and emotion of the lady’s voice; Teddy Randazzo’s ‘Big Mistake’ is classic uptown soul; ‘Spoil Me’ sounds a lot like ‘Take Me For A Little While’ (it was penned by the same Trade Martin).

However, whether it’s soul, jazz, country, pop or Italian balladeering, the collection proves why Timi Yuro was such a unique talent and why she has such a huge coterie of adoring fans.