TIMI YURO: Something Bad On My Mind + (Morello) 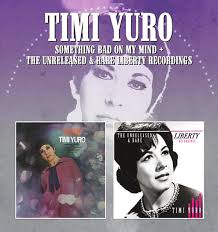 Timi Yuro was one of the first so-called “blue-eyed soul singers” though when she was at her peak in the mid 60s that term was rarely used. Born in Chicago in 1940, Rosemary Timothy Yuro began her singing career entertaining diners in her parents’ Italian restaurant, before moving onto the LA cabaret circuit. In 1959 she was signed to Liberty records and enjoyed her first hit in 1961 with a revival of Roy Hamilton’s ‘Hurt’. More hits followed – most produced by Clyde Otis and, famously, we’re told, she rejected the offer from Burt Bacharach to be the first to record his ‘What The World Needs Now is Love’. Burt obviously heard something in Timi’s powerful, emotional, soulful delivery; for her part, Timi clearly didn’t hear anything in the song! After a dalliance with country music Timi signed with Mercury where she cut one LP under the guidance of Quincy Jones. By 1968 she was back working for Liberty, where execs packed her off to London to record a “comeback” album and it’s that long player, ‘Something On My Mind’ that’s just won reissue via Cherry Red’s Morello imprint.

The 12 track album offers a good introduction to the art and style of Timi Yuro. The musical fare largely comprises big, dramatic ballads, not a million miles away from the material that Dusty Springfield worked on at the same time, though maybe Timi’s supercharged delivery lacks some of the subtlety and finesse of Dusty’s delivery. Amongst the best tracks are versions of ‘I’ll Never Fall In Love Again’ (a UK hit for Tom Jones), and Goffin and King’s ‘Hey Girl’ (re-titled here, ‘Hey Boy’). The track that has lasted the longest though is the busy mid-tempo shuffle ‘It’ll Never be Over For Me’ which became massive on the Northern soul scene. Rightly so; it shows that proper Northern soul had plenty of soul and for this song alone, Timi Yuro deserves her place in the blue-eyed soul pantheon.

The reissue comes with a generous 12 “bonus” tracks – rare and previously unissued recordings from Timi’s first stint at Liberty. The sound here, naturally, harks back to an earlier more innocent age but amongst the cuts there’s a fine take on Brook Benton’s ‘It’s Just A Matter Of Time’. Timi goes back to her Italian roots on ‘You’re Breaking My Heart’ and she even manages to inject some soul into ‘She’ll Be Coming Round The Mountain’!

The ‘Something Bad On My Mind’ album was a commercial failure and in 1968 Ms Yuro quit music to raise her family. In the 1980s she made a comeback of sorts in the Netherlands and later she worked with a long time supporter, Willie Nelson. However, fresh success remained elusive and in 2004 Timi Yuro passed away after a long struggle with cancer.

This reissue shows a little something of what Timi Yuro was capable of and If you don’t know about her, then this is a great way in!