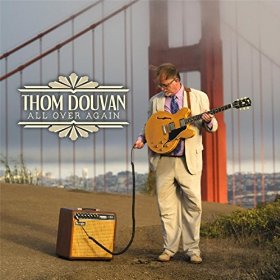 ‘All Over Again’ is Californian-based guitarist Thom Douvan’s third album as a leader and a follow-up to his acclaimed tribute to the Motown Funk Brothers. Sadly soul and funk fans seeking more of the same will be disappointed ‘cos the 12 tracker is essentially a smooth jazz affair – veering indeed to the lighter end of that particular musical spectrum.

The LP’s landmark track is the only cover – a great vocal version of fellow guitarist Kenny Burrell’s ‘Then I Met You’. Vocalist on the gentle, insinuating cut is the super session singer Lynne Fiddmont (soul connoisseurs will have fond memories of her ‘Say’) and she nails it perfectly –just the right mix of cool and passion. It’s the sort of thing that Diana Krall does so well. The cut appears three times on the set – a full length mix, a radio edit and an instrumental version. Sophisticated soul and jazz fans should at least have a listen.

The album’s other vocal is ‘Believe In You’ and though it’s billed as the album’s “funk” tune, it would be more accurately labelled “AOR” (Ms Fiddmont on BVs by the way). Elsewhere it’s mainly jazz lite with the best offering being ‘Wes Coastin” – a homage, I’m guessing, to Wes Montgomery. I’m thinking too that the frothy ‘Sephardia’ is a tribute to the aforementioned Kenny Burrell (“Sephra Music” was his publisher).

There’s one big oddity on the album – ‘Rhonda’. This is a mix of classical and blue grass and a brave attempt to add variety to what is a limiting genre. Guiltar buffs, by the way, will love the album’s liner booklet!