THOM BELL & OTHERS: The Fish That Saved Pittsburgh (Real Gone) 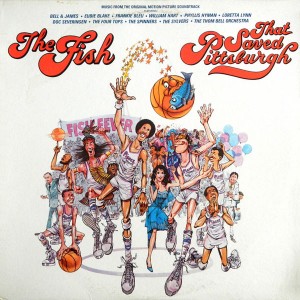 ‘The Fish That Saved Pittsburgh’ was a forgettable 1979 movie that producers saw as the follow up to ‘Car Wash’. The plot was risible. A down-at-heel basketball team employ a physic (Mona Mondieu) to improve their performances. The physic’s solution is to recruit players with the same star sign … Pisces, and guess what? Yep, the team win the championship! See what I mean by ludicrous… little wonder that the movie bombed, though, as is often the way with cinematic turkeys, ‘The Fish’ now enjoys a cult, geeky status.

The movie soundtrack, however, is another matter. The producers, encouraged by the success of the Norman Whitfield-helmed ‘Car Wash’, decided that they’d employ another hot soul producer to handle the score and in 1979 there was none hotter than Thom Bell. Bell, who’d never worked in movies before, was, we’re told, flattered by the invitation but soon after he began work on the project he became disillusioned as he realised that the producers and director were less than co-operative. Working “blind”, more or less, Bell came up with some quality music delivered by a plethora of top session players (Bob Babbit, Bobby Eli, Don Renaldo amongst them) and an A-list of vocalists, people like the Spinners, Four Tops and Phyllis Hyman. Sadly as the movie bombed, so too (unjustly) did the soundtrack. The movie company withdrew promotion and the album was quickly deleted. Now reissue specialists, Real Gone resurrect the set, allowing soul collectors to enjoy some quality, classic Philly soul… and I’d suggest that’s the best way to approach the album.

Forget the movie (everybody else did!) and consider this set as a superior Philly compilation, ‘cos that’s exactly what it is. The Spinners’ offering ‘(Do It, Do It) No One Does It Better’ is right up there with the veteran group’s very best while the Sylvers’ ‘Mighty, Mighty Pisces’ is one of the best songs the Spinners never recorded. On the Four Tops’ ‘Chance Of A Lifetime’, Levi Stubbs is superb as always; ditto Phyllis Hyman on ‘Magic Mona’. Sometime Delfonic William Hart stars on ‘Follow Every Dream’ (you’d be forgiven for thinking this a long lost Delfonics’ outtake) while for the album’s big love ballad, ‘Is It Love. Must Be Love’ Bell pairs one of his fellow song writers, Frankie Bleu, with country star Loretta Lynn and it’s mark of his genius that  Bell makes it work. Indeed, though it’s obvious, it’s Bell’s art that holds the album together. Whether it’s on the aforementioned vocals or the quality instrumentals (Philly disco), you’ll hear Thom Bell at the top of his game.

Bell’s experiences with this film were unhappy ones and he never scored another movie; that, though, doesn’t diminish what he actually achieved here!