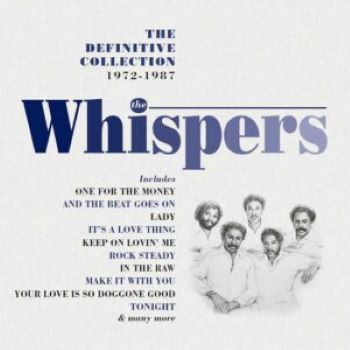 Veteran soul harmony group (they were founded back in 1963 in LA), the Whispers have never quite made it to the soul super league despite an impressive track record. The group (built around identical twins, Walter and Wallace Scott) have placed a remarkable 34 songs into the US R&B top 40. 15 of those hit the top ten  while ‘And The Beat Goes On’ and ‘Rock Steady’ both made no. 1. And therein, maybe lies the problem. Those two songs are, for want of a better description, “disco classics”. Indeed, many of the Whispers’ best-known items fall into the same category. Those two tunes and stuff like ‘It’s A Love Thing’,  ‘I Can Make It Better’ and ‘Contagious’ were guaranteed to get the girls dancing round their handbags at the local Palais while any wedding/events DJ will have those tunes in their box at every function. So maybe soul purists see the Whispers as (maybe?) a little lightweight – great to dance to but maybe lacking  a little soul heft.

Well, this new four CD, 62 track collection might go some way to rectify that fallacy. This “definitive collection” spans the years 1972- 1987 and features material they recorded for Janus, Soul Train and Solar and, sure, the box contains all those big disco tunes but for every glitter ball confection there’s a sweet and sultry soulful ballad – most featuring the distinctive voices of the Scott brothers. Amongst those ballads there’s none more poignant than their ‘A Song For Donny’ – the group’s homage to Donny Hathaway and, using the melodic structure of his ‘This Christmas’, it proves that the Whispers were/are real contenders. Other soulful ballads featured here include ‘Love is Where You Find It’, ‘Your Love Is So Doggone Good’, ‘Say You’, ‘Lady’, ‘In The Mood’ and ’Can’t Help But Love You’ . Sadly, I think, there’s no place for the super Whispers’ ballads ‘Give It To Me’ and  ‘Say Yes’. A more savvy compiler might have included them instead of the two Christmas songs (‘Funky Christmas’ and ‘Happy Holidays To You’) but you can’t have everything! This “definitive collection” is almost that and though the band might not be household names (especially in the UJK and Europe) I don’t think they’ll be too bothered. The Scott boys can simply polish their awards which include their place in the Vocal Group Hall of Fame (2003), a Grammy Governors Award (2005), an American Black Music Award (2007) and a place in the Soul Music Hall of Fame (2013).