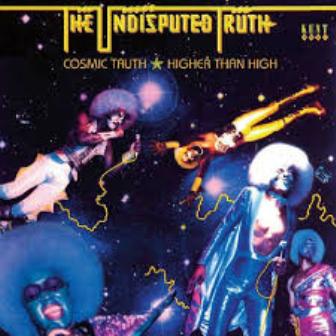 Ace/Kent’s latest foray into the Motown vault offers two oft neglected LPs (on 2 CDs) from an oft neglected group – the Undisputed Truth. Most Motown commentators would argue that they are “oft neglected” because they lack real identity and this collection helps explain that.

First a little history. Everyone knows that the Undisputed Truth were a creation of Norman Whitfield who wanted to take the Motown sound in a new directions (with or without the consent of Berry Gordy). Working with the Temptations he began that task but the Tempts’ legacy always weighed heavily on him, so a brand new group obviously offered him much more scope. Thus Undisputed Truth were born … Brenda Jo Evans, Billie Rae Calvin and Joe Harris. The trio enjoyed success fronting a soundscape sculpted by Whitfield but after 4 LPs the group’s two ladies quit. Rather than replace them with two more females, Whitfield drafted in, lock a stock and barrel, the Magictones – a hard gigging Detroit quartet – three guys and just one doll – Vee McDonald. And it was this quartet plus Joe Harris that fronted 1975’s ‘Cosmic Truth’ and ‘Higher Than High’. So yes, a complete change of line up, made more confusing, I think, by the sleeve art work and publicity photos that had the quintet geared up in spaced out make up and weird and wonderful wigs.

Sonically, both LPs are, well, typically Norman Whitfield circa mid 70s… big productions, heavy bass lines, and lashings of wah wah guitars – often it’s as if the vocal input is secondary. As ever Norman Whitfield used some of his old songs to flesh out his albums; so, for, instance, amongst the new songs, he lets the band have a go at the Temptations’ classic ‘I Know I’m Losing You’…. I know which version soul fans prefer.

Whatever, for Motown fans, it’s great to have these two albums in circulation again. Ace/Kent think this is the first time both LPs have been available (since original release that is) in any form and the twofer is out now.