THE TWO THINGS ON ONE: Together Forever (BGP) 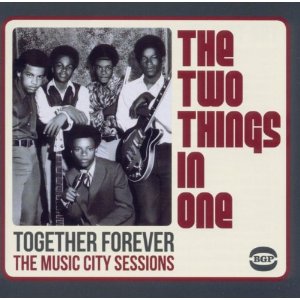 The Two Things In One were a quintet from Richmond, California. Michael Jefferies (vocals), Michael Griggs (guitar), Kevin Burton (Keys), Johnnie Tucker (bass) and Marciel Garner (drums) joined forces in 1969 and were soon the toast of the Bay Area clubs with their mix of wild funk and soulful-based rock. This limelight meant they were soon signed to Ray Dobard’s Music City label and between 1971 and ’73 they spent a lot of time in his infamous, no frills studio but despite a few single releases that achieved some local notoriety the fivesome felt exploited and manipulated by the wheeling and dealing Dobard. In 1972 the band started to disintegrate – with members moving onto play with the likes of Sly Stone, Maze and Tower of Power.

Recently Ace Records acquired licensing rights to the Music City catalogue and here, on their funk-led imprint, BGP, they assemble the best of the Two Things In One. The label couldn’t be more appropriate. The band’s music is, by and large, an earthy, rustic mix of power funk tinged with rock. In places it’s like same era Isley Brothers without the polish or the ethereal voice of Ronnie; on reflection, a better reference point might be the Chambers Brothers… for those of you can remember that aggregation.

Stuff like ‘Let’s Get It Together’, ‘Overdose’, ‘Snag Nasty’ and ‘You’re No Good’ will give you the flavour – some vocal, some instrumental, they’re all wild and unbridled and after a time it begins to weary, so when a ballad pops up it comes as a kind of blessed relief. The best of the slowies are ‘Silly Song’ and ‘Close The Door’. Much more interesting though are the covers. They include a version of Bacharach’s ‘Walk On By’ which owes more to Isaac Hayes’ version than Dionne Warwick’s and takes on Stevie’s ‘I Was Made To Love Her’, Herbie Hancock’s ‘Cantaloupe Island’ and Neil Young’s ‘Ohio’. Let’s just say they’re “different”… in the way that Vanilla Fudge’s celebrated covers were “different”.

As we said up top, the band members went onto lots of different things and are still working in the business. Michael Jefferies (who became the sixth Tower Of Power singer) for instance has recently released an album with his children – ‘Michael Jefferies, Daughter and Son’ (check out our archived review) and it’s rumoured that Two Things In One might make a comeback. I’m doubtful though that now – middle-aged and even beyond – they’ll be able to recapture the wild exuberance of these recordings.