THE TONY WILLIAMS LIFETIME: ‘Emergency!’ and ‘Turn It Over’ (Esoteric) 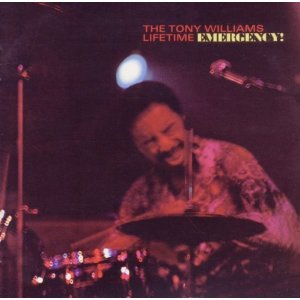 In early 1969, the 27-year-old British guitarist John McLaughlin – who’d cut his teeth playing in the bands of British acts like Georgie Fame, Brian Auger and Graham Bond – was plucked from relative obscurity and thrust upon the world stage. And it was all thanks to Tony Williams. The Philly jazz drummer – who as a teenage wunderkind had joined Miles Davis’ groundbreaking quintet in 1964 and stayed until 1969 – asked McLaughlin to join his new band, Lifetime, after hearing a demo tape. McLaughlin flew to America ostensibly to join Williams alongside organist Larry Young and rehearse with Lifetime but ended up playing on Miles Davis’ ‘In A Silent Way’ album. Though some observers regard ‘In A Silent Way’ as representing one of the first jazz-rock fusion albums, in reality it was Lifetime’s Polydor debut LP, ‘Emergency!‘ – recorded a couple of months later – that really lit the touch paper for the musical cross-pollination known as jazz-rock. That landmark double album is now reissued by the UK-based Esoteric label (one of the Cherry Red company’s many imprints). The set’s also been remastered and to this writer’s ears at least, is without doubt the best-sounding version yet.

The energy that Lifetime created was frightening. They were really the first jazz power trio. The combination of Williams’ volcanic drums with McLaughlin’s jagged, lightening-fingered fretboard runs and Larry Young’s mind-bending astral keyboards (a far cry from the Jimmy Smith style blues-based approach) resulted in a potent cocktail that eroded the barrier between jazz and rock, two musical territories whose borders had formerly been clearly demarcated. The title track bristles with power chords, pent-up energy and combustible improvisation while ‘Where,’ with its judicious use of light and shade, shows the band mixing jazz improv with rock dynamics to stunning effect. Some of the tracks, like ‘Beyond Games,’ feature Williams providing a half-sung, half-spoken vocal, which in the past have been viewed as one of the group’s weaker aspects but there’s no doubt they were certainly in tune with the spirit of the group’s revolutionary music back in ’69. Other highlights include ‘Spectrum,’ a high-voltage jazz-rock hybrid that’s a palpable stylistic precursor to what McLaughlin later achieved in the early ’70s with the epic Mahavishnu Orchestra.

Lifetime’s sophomore release, 1970’s ‘Turn It Over‘ is also back in circulation thanks to Esoteric. As with its predecessor, it’s been sonically enhanced by comparison with previous CD incarnations and is accompanied by some insightful liner notes. The 9-track LP demonstrated that the trio continued to push the jazz-rock envelope and were augmented by ex-Cream bassist, Jack Bruce, who supplied vocals and bass on the non-album single, ‘One Word,’ which is included as a bonus cut. The standouts include ‘Allah Be Praised,’ the blues-infused ‘To Whom It May Concern,’ the propulsive swinger ‘Big Nick’ – the nearest Lifetime got to straight ahead jazz – and ‘Once I Loved,’ a spacey ballad dominated by Larry Young’s eerie, ethereal organ washes. Despite their sense of adventure and innovative spirit, Lifetime’s music was too jazz-inflected for rock followers and yet, ironically, its music’s rock elements also alienated many jazz listeners. That’s probably why the both the group’s first two albums were commercial failures but there’s no denying that despite this, these two LPs functioned as jazz-rock manifestos and as such they proved hugely influential in the history of both the musical idioms they straddled. Essential listening for jazz-rock fusion devotees.

Interested in John McLaughlin? Read our interview with him here: