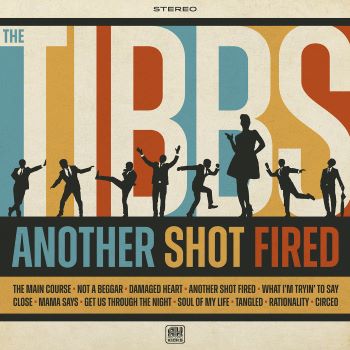 The Tibbs are a continental Premier League Dutch soul and funk outfit. Their last album was 2016’s ‘Takin ‘Over’ and it was choc-a-block of the sounds that has made the band a big draw on the continental soul club and festival circuit since their inception in 2012. That’s to say the music was pacey and full of energy; aimed straight at the dance floor.

Since 2016 the band has undergone a major personnel change. For reasons never fully explained (a quest for solo stardom?) singer Elsa Bekman has left and been replaced by Roxanne Hartog. However, that big, big switch hasn’t really changed what the Tibbs do. ‘Another Shot Fired’ takes off exactly where ‘Takin’ Over’ finished. The 12 tracker is another collection of organic, old school soul with a very particular European flavour and the new vocalist is every bit as feisty and convincing as Ms Bekman was. What’s more Ms Hartog has penned almost all the lyrics on the set… save for one track, ‘Cicero’, a meandering instrumental.

Indeed, it was one of Hartog’s classy songs, ‘Damaged Heart’ that was chosen as the LP-heralding single back in September. That one is a lovely, Hammond-led old school groove and it’s one of the album standouts, though a little more restrained than cuts like ‘The Main Course’. The album’s oddity or rather something a little different is the LP’s title cut which is given a definite reggae flavour, but the band’s new singer handles it with conviction.

It’s on the ballads, however, that Roxanne Hartog shines and shows why the band were keen to sign her up. Star ballad is the Southern flavoured ‘Close’ which features shimmering guitar underneath Ms H’s smouldering vocal.

The Tibbs: ‘Another Shot Fired’ is released on November 20th on Record Kicks.