THE THREE PIECES: ‘The Vibes Of Truth’ (BGP) 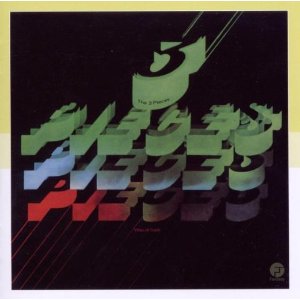 This long forgotten Washington DC-based trio faded quickly into obscurity after cutting this solitary and now highly collectable self-titled album for Fantasy in 1975. The group – Andre Richardson, Lincoln Ross, and Jerry Wilder – were protégés of trumpeter, Donald Byrd, who had not only experienced huge commercial success in the ’70s with crossover fusion albums like ‘Black Byrd’ but also was a mentor to acts like The Blackbyrds (comprised of former students of Byrd’s from DC’s Howard University).

Byrd took the talented Three Pieces under his wing and applying what he’d learned from working with the Sky High production team (Larry and Fonce Mizell), produced a great debut LP with ‘Vibes Of Truth.’ Sadly, though, the album didn’t take off commercially. Available on CD for the first time, it proves a cohesive blend of stylish vocal tracks and deftly-arranged instrumentals. The 9-song set embraces jazz, soul and funky fusion and features some great string and horn charts from ace arranger Wade Marcus. The highlights include the plaintive ‘Backed Up Against The Wall’ (where singer/keyboardist/trombonist Lincoln Ross sounds a bit like Bill Withers crossed with Lenny Williams), the funky blaxploitation-style instrumental ‘Shortnin’ Bread,’ the strutting ‘Self Dealin’,’ and ‘Concrete Jungle,’ a mid-tempo slice of greasy widescreen funk dominated by a lazy groove and tasty horn licks. There’s not a weak track to be found on what is undoubtedly one of the year’s best reissues – and that’s the gospel truth!