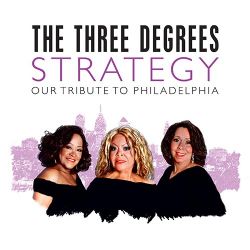 Named for their cover of the Archie Bell hit, ‘Strategy’ is a sort of “comeback” album for the Three Degrees, though the long-running female group’s fans would argue that the trio have never been away! In a way that’s right: the Three Degrees have been in business for nearly 50 years and, incredibly, they still feature two original members – Helen Scott and Valerie Holiday. They tour constantly and are always in-demand for TV shows and special nostalgia events but the 9 tracker, ‘Strategy’, is the girls’ first brand new recording for quite some years… and what better way for Helen, Valerie and new member Freddie Pool to get back into gear than to record a set of songs that takes them right back to their Philadelphia roots.

Though recorded in Atlanta (with a full orchestra, by the way), ‘Strategy’ sees the Three Degrees offering their versions of some of the very best of Philadelphia. Apart from the title track, the album features ‘Ain’t No Stopping Us Now’, ‘Me And Mr(s) Jones’, ‘Love Train’, ‘Disco Inferno’, ‘If You Don’t Know Me By Now’, ‘Don’t Leave Me This Way’, ‘You’ll Never Find Another Love Like Mine’ , and ‘TSOP’ on which the girls reprise the vocal parts they added on the 1973 original (yes that long ago!)

Sensibly all the songs are treated with respect though there is the occasional innovation. Like looking at the Billy Paul classic from a female perspective. There’s also an added monologue on that one and some delightful (uncredited) piano. It’s an album highlight only bettered (for me) by the cover of ‘You’ll Never Find’. It’s my standout simply ‘cos it’s my favourite Philly song ever and that’s the beauty of this album. It allows you to hear new favourites and with the subtle twist that new recordings bring they’re thrown into fresher light. All Philly fans will find plenty to like here.

The album is officially released on March 4th and the girls then embark on 30 show tour right across the UK. Find more details @ www.thethreedegrees.com