THE TEMPTATIONS; All The Time (UMC) 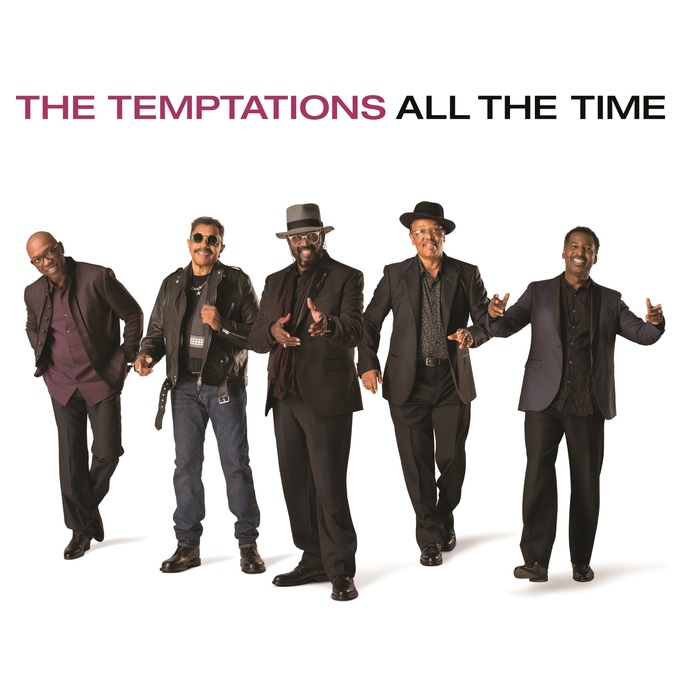 There just aren’t enough superlatives with which to describe the mighty Temptations and their garlanded career. The Emperors of Soul first got together in 1961 and in more than fifty years, they’ve weathered countless personnel changes, endured the loss of charismatic lead singers and embraced changes in musical styles and tastes. Not counting compilations, the Tempts have released 45 albums and to prove that they can still deliver, they’re all set to release this new collection…. ‘All The Time’ at the start of May.

‘All The Time’ is the group’s first release for nine years and it sort of illustrates why the Temptations have survived at the top for so long. You see, the long player proves that the Tempts aren’t afraid to experiment; to push that envelope and embrace change. So, for the 12 tracker the veteran quintet have dipped deep into the songbooks of a selection of key contemporary artists – people like like Sam Smith, Bruno Mars, John Mayer and Ed Sheeran and to help them deliver they’ve employed a producer known for working way beyond the boundaries of traditional soul. The man at the boards is Dave Darling known for his work with, among others, Glen Campbell, Brian Setzer, Tom Waits, and Janiva Magness and he manages to bring a freshness to the sound while retaining all the components that make the Temptations what and who they are…. that’s to say the searing lead vocals and the beautiful harmonies.

Hear all that on the album’s focus track…. Sam Smith’s ‘Stay With Me’. Otis and the gang make it their own taking it from dear old Bishops Stortford right down to Soulsville…. and if you want to crank up the song’s soul quotient, then it also comes in a special gospel mix.

Amongst the other cover highlights are a plaintive version of Ed Sheeran’s ‘Thinking Out Loud’ (complete with signature spoken intro from Otis Williams) and a sprightly take on John Mayer’s ‘Still Feel Like Your Man’ (a great vehicle for Ron Tyson).

The album also boasts three original songs. ‘Be My Wife’ takes the honours. This is a classic Temptations outing and destined to become a steppers anthem; ‘Waiting On You’ is a sweet ballad; while ‘More Than Britches’ harks back to the sound of ‘Standing On The Top’. It comes in two mixes too…. both funky as hell!

So back to where we came in…. why have the Temptations survived? Well, guided by founder Otis Williams, their sound is ever-evolving but rooted in the old school soul qualities and values that have been hallmarks of the group for over fifty years. ‘All The Time’ is the embodiment of all that!