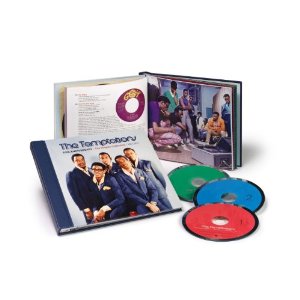 If you haven’t already made your Christmas list for Santa, here’s a collection that you MUST include… and include pronto… get it stuck up that magical chimney before it’s just too late! To cut to the chase, this three CD , 79 track collection is quite simply the very best collection of Temptations’ hits ever assembled. The album , beautifully presented, offers every single Motown 45 (the A and B sides) – that the Emperors of Soul released between 1961 and 1971.

It begins with the fivesome’s first tentative steps towards stardom. They’re clearly trying to find a direction and on stuff like ‘Slow Down Heart’ and ‘Oh Mother Of Mine’ you can hear them trying to struggle to define their sound – a mix of old school doo-wop and the then new “soul harmony”. The dilemma meant that, falling between two stools, they failed to have impact. Almost in despair, the boss, Mr Gordy, suggested a name change… thus we can enjoy “the Pirates” on ‘Mind Over Matter’ and I’ll Love You Till I Die’.

Enter William ‘Smokey’ Robinson … and the signature sound of the Tempts started to crystallise. The Miracle worker, given the producer’s role, analysed what he had in the group – and he quickly realized that the group’s biggest assets were the twin strike force of Eddie Kendricks and David Ruffin ( who’d replaced the disillusioned Eldridge Bryant). Smokey started writing to those strengths and the hits started to flow culminating in the simple majesty of 1964’s ‘My Girl’. Robinson continued to work with the group till ’65 by which time Norman Whitfield had started to take some responsibility. It mattered little, though, ‘cos the hits continued and continued to continue even after the ego-tripping Ruffin had quit to be replaced by Dennis Edwards. Even when tastes changed and so-called “physco-soul” was the order of the day, Whitfield and the Tempts continued to deliver … and even amidst the sound and fury of stuff like ‘Ball Of Confusion’ and ‘I Can’t Get Next To You’, he could still coax classic old school winners like ‘Just My Imagination’ from the group. That one track, I think, is the Temptations’ finest hour… but there’s plenty here that runs it close (for instance, the collaborations with the Supremes ….. they’re included too and deserve reonsideration). You can make your own pick from every A and B side they issued in their ten year purple patch. While listening to the sublime music you can also enjoy the pack’s vintage pictures and the extensive annotation which will tell you everything you’d ever need to know about the group.

The only pity is that the set ends in 1971… hopefully the Motown/Universal execs are working on a volume II… it would be a great Christmas for present for next year…hint, hint!