THE SWEET INSPIRATIONS: Let It Be Me -The Atlantic Recordings (SoulMusic) 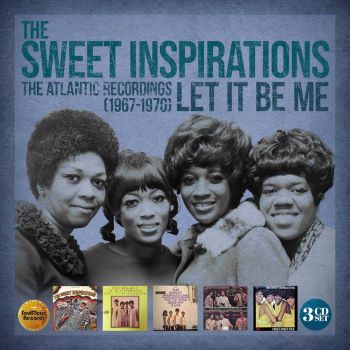 Every major soul commentator is in agreement – The Sweet Inspirations were soul’s premier female vocal group – with the emphasis, of course, on soul. Sure, groups like the Supremes and the rest of the Motown contingent, the Three Degrees, the Shirelles, the Ronettes and others might have enjoyed more hits and notoriety but none of those could ever hope to match the sanctified, soulful testifying of the “Sweets”. If you doubt that contention then may we point you to this wonderful new retrospective which brings together all the music they recorded for Atlantic between 1967 and 1970 – without doubt, the group’s golden age.

First a little history which should help explain why the group’s speciality was “sanctified, soulful testifying”. The Sweet Inspirations grew out of one of gospel’s most celebrated ensembles – New Jersey’s  Drinkard Singers. That group was founded by Nictholas “Nitch” Drinkard as a vehicle for his children and their place in gospel history was secured by their 1959 incendiary live album ‘A Joyful Noise’ recorded at the Newport Jaz Festival. The line up for that album was Judy Guions (better known as Judy Clay), Marie Epps and Larry, Nick, Ann, Lee and Emily Drinkard. Various personnel changes ensued  while Lee and Emily married to become Lee Warrick (mother of Dionne and Dee Dee) and Emily “Cissy” Houston (mother of Whitney) respectively . Lee Warrick eventually became the manager, finding the group and her daughters plenty of work on the lucrative New York session circuit. The ranks of this super session collective grew when ex Gospelaire singers Myrna Smith and Sylvia Shemwell joined the team followed by rising gospel star Estelle Brown. By 1966 with Dionne and Dee Dee now pursuing solo work, the session group had crystalised into Smith, Shemwell, Brown and Cissy Houston. Around the NY studios they were known as “Cissy’s Girls” and one studio in particular was using the girls more and more – Atlantic. Atlantic exec Jerry Wexler had always been impressed by the group’s potential and decided to offer them their own contract. He suggested they they call themselves The Inspirations. But it seems there was already a group with that name so “Sweet” was added at the suggestion, it’s said, of Chuck Jackson.

The Sweet Inspirations recorded five albums at Atlantic and released numerous singles, and though major chart success eluded them, their work at Atlantic represents a soul pinnacle. Sure different line ups worked consistently after their Atlantic tenure – they recorded  albums with Stax, Columbia and RSO, they  achieved notoriety as backing singers for Elvis Presley and still work  – with Estelle Brown out front, but nothing would ever match what they produced at Atlantic.

This  particular Atlantic collection offers 67 tracks across 3 CDs and dip in anywhere and you’ll hear absolute aural definitions of female soul singing. Highlights? Well, too many to list – some of the obvious ones are versions of ‘Make It Easy On Yourself’, ‘To Love Somebody’ and the incendiary version of ‘Let It Be Me’ for which the collection is named. The lesser known songs offer plenty of treasure too. I contend that the Cissy Houston-led ‘You Really Didn’t Mean It’ rivals any of the acknowledged classics from people like Aretha, Gladys and Patti in intensity, passion and soul. If it doesn’t move you, you’re clearly lacking something!

Sadly, the music here (recorded at storied studios in New York, Philadelphia, Muscle Shoals and Memphis) was too darn intense, passionate and soulful for mass consumption. But Joe Public’s loss is the real soul connoisseur’s gain. In his excellent sleeve notes, Tim Dillinger reinforces just that. He says that the Sweets created a rare kind of vocal art, honed in gospel. He says: “While some artists search for the right recipe for hits, others make the music they make out of their of the song and believe that they should be hits because of that. The Sweet Inspirations made such art.”