THE SURE FIRE SOUL ENSEMBLE: Step Down (Colemine) 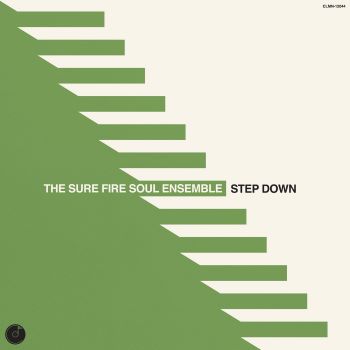 The Sure Fire Soul Ensemble  is one of (it seems) a growing number of instrumental soul and funk bands. Fans of the genre will know all about them as they already have three acclaimed LPs under their belt! The band are marshalled by keyboardist Tim Felton. Classically trained, his musical odyssey changed when he heard the Beastie Boys  and the Wu Tang Clan. From there he got into DJ Shadow and eventually Miles Davis and Herbie Hancock. After getting to know Daptone music, Tim decided he needed to form his own band – hence the Sure Fire Soul Ensemble was born in 2012.

That brief history lesson should tell you what sort of sound the SFSE make … yep, soulful, jazzy, funky, organic, big and brash. Since 2012 and over the aforementioned three albums, they’ve added flavours of afrobeat, trip-hop, Ethio-jazz and even psychedelia… a heady mix indeed and you can sample it all via their latest album, ‘Step Down’.

The 10 tracker was recorded during lockdown  and the band say that the music reflects those heavy, heavy times … times that not only saw the surge of Covid, but Presidential impeachment trials, the George Floyd murder and the riots at the US Capitol. So, yes, the music is big and bold, in places cinematic and sinister but always tough and soulful with no concession to window dressing or prettifying.

Enjoy ‘In Common’ for its funky flavours; ‘Love Age’ for it moody soul-jazz sound; ‘Gandy’s ‘for its big brass bragging and the album’s title track which encapsulates what the SFSE are all about… the remaining  six tracks yield pleasures too though some might argue a  little more lightness amidst the shade might have made for a more varied collection.

Tags: The Sure Fire Soul Ensemble