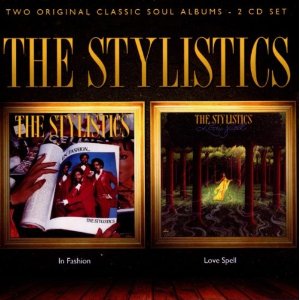 The Stylistics were – indeed, still are – one of THE great sweet soul groups. Sure their catalogue includes some duds (incredibly money-making duds!) but it’s also stuffed with some of the most romantic and truly soulful recordings of any era. Their best “era” of course was the early 70s when they scored dozens of hits for the Avco group of labels. When that label floundered the Stylistics found themselves with Mercury for whom they recorded ‘In Fashion’ and ‘Love Spell’ – two long-neglected albums now reissued by soulmusic.com.

Mercury brought in the legendary Teddy Randazzo to work with the group and, clearly, his brief was to recreate the magical sound that Thom Bell and Linda Creed had coaxed from the boys in their heyday. On 1978’s ‘In Fashion’ the most successful recreation of THAT sound was ‘Looking At Love Again’. It’s a quite superb ballad that borrows elements from many of the Stylistics’ earlier hits… wonderful! ‘First Impressions’ (NOT the Impressions’ song) is similarly constructed and as a single it took the band back into the charts. The ‘Love Spell’ album was issued in ’79 and though Randazzo was still in charge, he allowed the group to record a couple of their own songs and on their ‘You Make Me Feel So Doggone Good’ and ‘Fantasy’ they strive to break away from their ballad image. Wise old Teddy, though, knew that it was ballads that they were best at and his ‘Love At First Sight’ is a Stylistics classic in waiting.

After the deal with Mercury folded the outfit became soul pilgrims – moving from label to label with an annoying regularity. That journey, of course, included a wonderful stint with Gamble and Huff before time and those legendary “musical differences” rent the Stylistics asunder. Nowadays two bands tour using the name – one led by Russell Thompkins Jr, the other under the guidance of Airrion Love. Both put on wonderful shows – heavy on the retro, naturally, and I’m sure they don’t include anything from these two LPs… more the reason to investigate!