THE STUBBS GIRLS: Here We Are (www.stubbsgirls.com/ Crew) 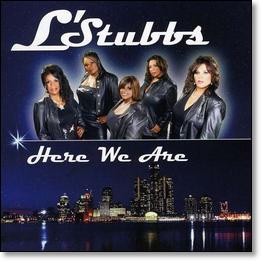 The Stubbs Girls are a Detroit-based vocal fivesome that consists of Levi Stubbs’ sister, Thelma and her four daughters – Bobby, Pamela, Sheila and Ronda. ‘Here We Are’ is their debut LP and it was originally released couple of years back when the ladies called themselves L’Stubbs. Now, for whatever reason, they’ve restyled their name and are busy re-promoting the album and good for them ‘cos it’s well worth investigating and it would be a shame if it just faded away, which apparently, it was in danger of doing!

You see the 13 tracker is one of those old fashioned soul sets that aren’t made that often these days. Expect no frills or gimmicks here… what you see is what you get – proper songs delivered by the five ladies in that time honoured tradition than can trace its lineage back to the church. They establish their credentials from the off with the urgent ‘I’m Dreamin” –a cut that fairly zips along but what strikes you most is the commitment from the lead vocalist – sadly the notes fail to tell you which of the five it is out front. ‘Oh No Not Tonight’ is another dance opportunity – if a little more sedate. It boasts a lovely catchy melody and those great harmonies that family groups seem to specialise in. Best dancer however is the penultimate track – ‘Love Finds Love’. For this, the Stubbs clan draft in assistance in the form of Frank Reed who’s been lead singer in the Chi-Lites for the last 20 years. The cut is a cracker and will delight both the modern soul room crew and the steppers crowd.

There are some great ballads on the album too – notably ‘All Is Well’ (shades of the great Ann Nesby about this one) and the sultrier ‘Should Have Known Better’. Add to all that a sprinkling of well-crafted mid-tempo shuffles and a semi-instrumental – ‘Come To Me’ (the girls coo the chorus) and you have a great new soul set – a goodly cut above most current indie soul. The album comes complete with a ringing endorsement from Four Tops survivor Duke Fakir. He opens proceedings by declaring that Levi’s genes are still working their magic! I wouldn’t argue.