THE STAPLE SINGERS; This Time Around (Ace/Stax) 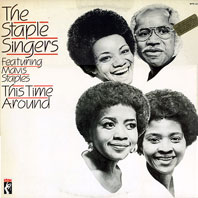 The Staple Singers enjoyed their most productive and commercially successful period when they were Stax artists. Hits like ‘I’ll Take You There’. ‘Respect Yourself’ and ‘Heavy Makes You Happy’ put them into the soul/gospel premier league. But ask a soul connoisseur for their favourite Staples track and my guess is that most would plump for the Philip Mitchell-penned ‘Trippin’ On Your Love’. The song originally appeared on the family group’s 1981 Stax album, ‘This Time Around’ which has just won reissue via UK label Ace.

The album has an interesting pedigree. The 8 songs on it were all recorded in the Staples’ Stax heyday but they were never released till long after the Staples had left the label. When Stax went belly up in 1975 the family signed to Warner Bros before moving onto 20th Century and it was during their tenure with that label that the then Stax catalogue owners, Fantasy, decided to dig out the unreleased Staples songs and ‘This Time Around’ was issued in 1981. Fantasy “smartened” up the original Stax tapes for the release and it’s been reported that the family – particularly Mavis – weren’t too happy with the end results – but Staples fans in particular and Southern collectors found no reason to complain. The 8 tracker was well-received and in ‘Trippin’ On Your Love’ the group had crafted a soul classic – beloved right across all the different soul scenes.

That song, though, isn’t the only thing to commend the album. ‘If It Wasn’t For A Woman’ is a soul tour de force on which Mavis proves her credentials as one of soul’s best ever emotive vocalists. The production, credited to Stax’s Al Bell, is quite beautiful. ‘I’ve Got To Be Myself’ is tougher and recalls the sound and sentiment of ‘Respect Yourself’ while ‘When It Rains It Pours’ (another Philip Mitchell song by the way) is another masterpiece. Yes – nothing to disappoint here. The only reservation is that this CD reissue lacks any bonus cuts… all you get is the bare 8 track LP. In fairness the Ace people do apologise. They usually like to stuff their archive reissues with all kinds of extras but in this case none were available. Still, the 8 cuts are all strong enough to recommend.