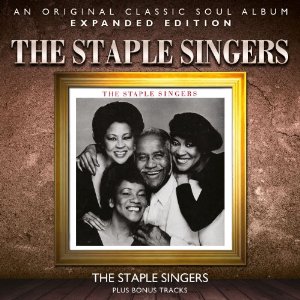 The Staple Singers are always associated with Stax Records. But the first family of gospel were only at the Memphis label for around six years. Yes, six hugely fruitful years – but they’d honed their craft for a long time before their Stax debut, ‘Soul Folk In Action’, and after leaving the Stax fold they continued to record for many other labels – albeit with varying degrees of success. By the mid 80s they were working for Epic/Private I where label execs tried to break them to a wider audience by having them work with the then darling of the chattering classes, David Byrne of Talking Heads. The collaboration, ‘Slippery People’, gave the Staples a top 40 hit and the song was the focal point of the group’s ‘Turning Point’ LP. Natural then, that for the follow up album Byrne should be brought in again. He duly provided ‘Life During War Time’ for the Staples’ 1985 eponymous long player and it’s that set that’s just won its very first CD release via soulmusic.com.

It’s easy to hear why the album’s taken a long time coming back into print. Put simply, it’s not that great an album… explaining why the reissue specialists have shied away until now. The Staples Singers’ best work is raw, honest and organic. On this album that special sound is lost behind a welter of electronic instruments and rock guitars as witnessed by the LP’s lead single ‘Are You Ready’ and the Byrne song, ‘Life During War Time’. Elsewhere ‘Start Walking’ has an 80s throwaway pop feel to it while the electronically generated reggae rhythms of ‘Reason To Love’ are quite at odds with the vocals… and it’s those gospel-honed vocals that salvage the album. Hear them at their best on the soulful ballad ‘Love Works In Strange Ways’… Mavis S pulls out all the stops to add real conviction to the reflective, spiritual message. It makes the reissue worthwhile and for die hard Staples fans the set comes complete with three remixes of ‘Are You Ready’.