THE STAPLE SINGERS: ‘Let’s Do It Again’ (Omnivore) 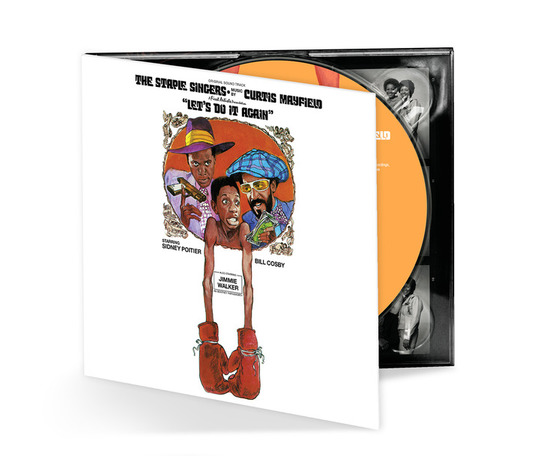 The union between gospel-soul group The Staple Singers, and Stax Records, which began in 1968, was undoubtedly a musical marriage made in heaven. Jim Stewart and Estelle Axton’s famous Memphis label oversaw the Chicago family group’s greatest commercial triumphs in the early 1970s, releasing the No. 1 US R&B hits ‘I’ll Take You There,’ and ‘If You’re Ready (Come Go With Me).’ But the label’s financial problems, which began in 1974, eventually led to the unthinkable: Stax and the Staples divorcing one another. As Stax went down the plughole, Pop Staples took his children to Warner Brothers, where their first recordings were for a soundtrack album to the film Let’s Do It Again, a forgettable 1975 comedy turkey starring Sidney Poitier and Bill Cosby. The film has long been consigned to the dustbin of history but the soundtrack has lived on via successive reissues over the years. It’s now been revived by US reissue specialist, Omnivore, alongside three other Staples’ Warner albums: ‘Pass It On,’ ‘Family Tree,’ and ‘Unlock Your Mind.’

‘Let’ Do It Again’ was the first of several collaborations with the “Gentle Genius,” Curtis Mayfield. Like most soundtrack albums, it’s uneven in places and not compelling all the way through but there are enough nuggets to keep the listener pressing the play button. The killer track is the Mayfield-penned title song. A lazy, ambling groove sweetened by arranger Gil Askey’s strings and fronted by Mavis Staples’ husky, orgasmic contralto, ‘Let’s Do It Again’ is absolutely gorgeous. A celebration of carnal love that rode all the way to the summit of both the US R&B and pop charts at the end of 1975, the song was also very risqué for a group noted for its spiritual messages. The Staples’ sanctified vocals appear on four more cuts including the funkafied ‘New Orleans,’ which was a minor hit,  and the uplifting, more gospel-oriented ‘I Want To Thank You,’ with its rolling groove. The remainder of the album is fleshed out with three forgettable blaxploitation-style instrumental tracks (‘Big Mac,’ ‘After Sex’ and ‘Chase’) indebted to Isaac Hayes’ Shaft soundtrack. They conclude the album on a disappointing note after the tantalising promise of the five cuts featuring the Staples family’s glorious voices. Even so, this is an album that should have a place in every serious soul collectors’ CD rack. Bolted onto this new reissue are three single edits (the title track, ‘After Sex’ and ‘New Orleans’).