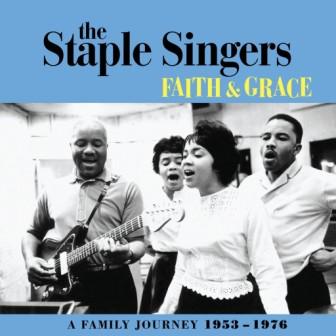 With Christmas looming, most of the big labels are busy reissuing classic albums and putting out tasty box set retrospectives on their big names. Universal’s Concord imprint now joins the fray with a wonderful 4 CD box set on the first family of Gospel – the Staple Singers.

This ‘Faith And Grace’ album – named for the set’s big bonus item, a 7″ vinyl pressing of the Staples’ very first record, 1953’s ‘Faith and Grace’ – is subtitled ‘A family journey’ and that’s exactly what the 80 tracks represent; the evolution of band and a unique sound, like nothing else in gospel, soul or any other genre for that matter.

The first CD in the set features the band’s early output for labels like Savoy and Vee Jay. The music is raw and passionate and you can hear the family searching to find their signature sound – the melding of Pops’ tenor and young Mavis’ thundering soul underpinned by Pops’ finger picked electric guitar, awash with echo. That sound is almost there on the tough ‘Each Day’ and the more familiar ‘This May Be The Last Time’ –the song that inspired the Stones’ ‘The Last Time’. The included track here, by the way, is a rare alternate take.

CD 2 continues with the band’s Vee Jay output before including the cream of their Riverside recordings. These include a version of Dylan’s ‘Blowing In The Wind’, indicative of where the Riverside execs were trying to pitch the band… hitching them to the “authentic folk” boom sweeping the US intelligentsia in the mid sixties. (Soul anoraks would, I’m sure, like to know that that particular track also features Phil Upchurch and Johnny Pate). There’s more Dylan on CD 3 with recordings taken from the band’s tenures at Riverside, Vanguard, D Town and then Epic. Of note is their Epic cover of Stephen Stills’ ‘For What It’s Worth’. Recorded in 1967, again it shows label execs trying to find a niche for the Staples… further illustrated by a version of ‘Crying In The Chapel’ credited to “Mavis Staples with the Staple Singers”.

The last three tracks on CD 3 are Stax recordings and include the break through ‘Long Walk To DC’. At last, its seems execs and producers (like Steve Cropper) knew what to do with the Staple Singers and, more importantly, how to make their very special sound commercial. CD 4 offers all the Stax biggies and their lovely Curtom recorded take on ‘Let’s Do It Again’ and the Band’s live version of ‘The Weight’ on which the Staples guested.

As a bonus you can enjoy the demo of ‘Respect Yourself’, but the box’s big bonus is that 7″ single that we mentioned up top. The disc features the earliest known recording of the family and it’s the first time the tracks (‘Faith And Grace’ and ‘These Are They’) have been available in any format since the initial self-released issue way, way back in 1953. The two songs were originally released on either side of a 78 and were made in Pops Staples’ Chicago basement and only 500 copies were ever pressed up! The sleeve notes (which include input from Mavis) explain all and, with the box retailing at just over £40, add real value to a collection that would make a great Christmas pressie for any proper soul fan.