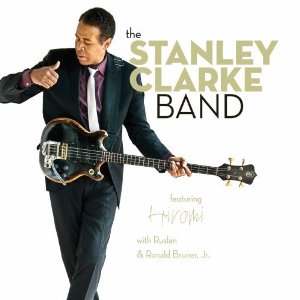 An excellent new set, this, from veteran bass player, Stanley Clarke – though to be honest, to describe the 59-year-old Philly-born Return To Forever member as merely a bass player doesn’t get anywhere near to the sheer scope of his musical accomplishments. Along with Jaco Pastorius, Clarke’s jaw-dropping virtuosity and innovative technique revolutionised bass playing in the 1970s (he’s adept on the double bass as well) and he’s also made his mark as a composer of movie soundtracks in recent years.

The title of this new album reflects the fact that Clarke wants to emphasise the important musical contributions of his band, which comprises Russian keyboardist Ruslan Sirota and drummer Ronald Bruner Jr and certainly, the record has a deeply organic feel. The opening cut, ‘Soldier,’ showcases the band’s versatility and Clarke’s ability to paint evocative musical pictures – it starts with a plangent lead bass motif that’s stately and cinematic in character before leading to a subtle jazz groove (with Clarke playing the melody on his bass) that eventually morphs into a grungy, yet infectious, driving rock-style passage. Later on the piece is transformed again, with the addition of chanted wordless vocals over a relaxed rhythmic undertow.

Fulani’ is more sedate in character, evincing a late night smooth jazz feel. By contrast, ‘I Wanna Play For You Too’ is a earthy piece of vocoderised funk driven by Clarke’s trademark slapped bass. Fans of the jazz-rock-fusion behemoth Return To Forever will be interested in Clarke and his band’s energised revisitation of the Chick Corea-penned RTF classic, ‘No Mystery.’ And anyone who thinks that the electric bass isn’t capable of achieving sonic beauty should listen to the wonderfully lyrical intro to ‘Bass Folk Song No 10.’

In a different vein is the unusually titled ‘Larry Has Travelled 11 Miles And Waited A Lifetime For The Return Of Vishnu’s Report’ – astute jazz fans will recognise that the title alludes to the key players in ’70s fusion: namely Miles Davis, Larry Young, Tony Williams’ Lifetime, Mahavishnu Orchestra, Return To Forever and Weather Report. Overall, then, an absorbing and varied album – catch Clarke and his band at Ronnie Scott’s from July14th-16th.